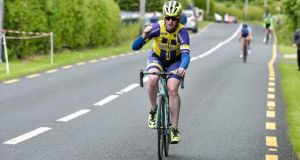 Gardaí have launched an investigation into the death of a cyclist who died when he hit a motorbike during a road race in Co Wexford last weekend.

Sean Lynch, a 34-year-old from Rathfeigh in Co Meath and who raced with the Drogheda Wheelers Club, was pronounced dead in hospital on Thursday morning.

He had crashed while racing in the Frank O’Rourke Memorial last Sunday afternoon, an event open to racing cyclists from all over the country.

Mr Lynch crashed into a parked motorcycle during the race, which was then abandoned. The injured man was treated at the scene before being taken to Wexford General Hospital.

However, he had remained gravely ill since the crash and his club confirmed he died on Thursday morning.

While he suffered the injuries during a race, the Garda is investigating his death as a road traffic fatality. Gardaí in New Ross station are carrying out the investigation into the fatal crash which occurred just after 1.30pm on Sunday.

“At approximately 1.40pm a 34-year-old male pedal cyclist was in collision with a parked motorcycle on the main road from Adamstown to Carrickbyrne, Co Wexford,” the Garda said.

“The injured man was taken to Wexford General Hospital with serious injuries and was subsequently pronounced dead today, Thursday, May 9th.”

The statement added investigating gardaí are appealing to anyone who witnessed the crash or who may have information about it to contact New Ross Garda station.