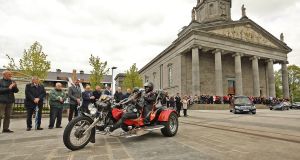 The hearse carrying the remains of Eugene McGee, led out by his daughter Linda on the trike he purchased for her, leaves St Mel’s Cathedral in Longford following his funeral mass on Thursday afternoon as the members of his 1982 winning team form a guard of honour. Photograph: Lorraine Teevan

Members of the 1982 Offaly team, who made their own history in stopping Kerry from winning an historic five All-Ireland senior football championships in a row, formed a guard of honour on Thursday as a tribute to their late manager Eugene McGee.

One onlooker outside St Mel’s Cathedral in Longford said “legends” as the hearse bearing McGee’s remains passed his players of 37 years ago.

“Legends,” the man repeated as he named his GAA heroes while the cortege, led by bikers from the Freewheelers club, including McGee’s daughter Linda, made its way to the cemetery at Colmcille, in Aughnacliffe.

The events of Sunday September 19th, 1982, when, with the last kick of the game, substitute Séamus Darby drilled the ball into the back of the net to end the Kingdom’s reign, dominated the day. It is an event still cherished in Offaly, as is Eugene McGee for helping to make it possible.

The ball used in that game was one of the gifts presented during his funeral Mass. Speakers alluded to the victory again and again, and his remains left the cathedral to the strains of The Offaly Rover.

Still, as Mass celebrant Fr Michael McGrath noted, McGee “was always rooted in his Longford place of birth” and his advice had been “to remain true to the local”.

In his eulogy, journalist PJ Cunningham recalled how McGee “hated pomp. He hated bombast.” He said his friend “knew how to find talent, how to harvest talent, to fulfil talent”.

While he “appeared very gruff, maybe even a bit self-absorbed”, Cunningham added, those who knew him could see McGee “was far from being self-absorbed or gruff. He was kind, caring, considerate”.

I can’t understand how he did all that while being such a devoted husband to my Mam, and father to me and Linda

He died following his son Conor’s wedding to Saoirse last weekend. Conor spoke of “the incredibly dark time” the family had experienced but said they had heard so much since about his father’s achievements.

“I can’t understand how he did all that while being such a devoted husband to my Mam, and father to me and Linda. I can’t recall a single time in my life when anything came ahead of us,” he said.

In his sermon, Fr McGrath recalled the speech Offaly footballer Seán Lowry delivered to his colleagues before the 1982 final.

“Lads, you’re playing for yourselves, your family and your county, and for people you’ll never see or meet. People from all over the world this weekend, from places like America, Australia, New Zealand, they’ll all have their chest out on Monday if you beat Kerry. You’ll never see them. These are the old people living down small country roads all over Ireland who are rooting for you today, but you’ll never meet them and you’ll never realise the huge lift you’ll give all those people if you go out and beat Kerry today.”

Fr McGrath said there were people who “still walk tall” today as a result of the memory of what followed.

Cunningham recalled how McGee, who led with that speech in his book The GAA in My Time, said: “. . . as I watched the faces, the eyes of every Offaly player going out after that speech . . . I was sure we were going to beat Kerry after that.”

The Mass was celebrated by Fr McGrath, assisted by Bishop Colm O’Reilly, retired Bishop of Ardagh and Clonmacnoise, and Fr Frank Gray.