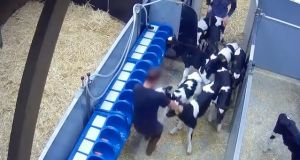 A video recently released shows Irish dairy calves being physically abused by workers at a control post in France after arriving from Ireland in March. Image: Screengrab from Association L214 video

The Department of Agriculture has welcomed progress being made in France into dealing with mistreatment of calves shipped from Ireland. It has called on people with direct knowledge or evidence of animal welfare abuses to report them to the relevant authorities.

A video recently released by French and Dutch animal welfare groups, Eyes on Animals and L214, shows Irish dairy calves being physically abused, kicked, dragged by the ears, thrown and stamped on by workers at a control post in France after arriving from Ireland in March.

The shocking footage has prompted an outcry in both France and Ireland and led to the arrest of at least one person with a police investigation ongoing.

A spokesman for the Department of Agriculture condemned “in the strongest terms any ill treatment of livestock”.

He said Ireland applied “strict controls in relation to welfare of animals including during transport and has procedures and checks in place to ensure compliance with EU and national legislation”.

Before export all livestock undergo an animal health and welfare check carried out by a department-approved vet to ensure that only fit and healthy livestock are certified for export.

“All trucks are inspected and checked for water, spacing and other legislative requirements prior to departure. Where non-compliance is identified, appropriate remedial action is taken,” the spokesman said.

He concluded by saying the department was continuing “to engage with their French counterparts and understand that progress has been made by the French authorities in their investigations”.

The Irish Society for the Prevention of Cruelty to Animals has described the “brutal and cruel handling of calves” as completely unacceptable.

A spokesman said the investigation by Eyes on Animals and L214 also found that calves were transported for more than the maximum allowable journey time of 19 hours and not rested or fed appropriately. Lorry drivers were exceeding the maximum allowed number of driving hours, risking not only animal welfare but also themselves and other road users.

The ISPCA has called on the Minister for Agriculture Michael Creed to launch an immediate investigation and to immediately suspend the export of calves from Ireland to France and the Netherlands until the investigation is complete.

It also expressed concern about the large increase in the number of dairy calves being exported to the continent from Ireland over recent years “following the rapid and unsustainable increase in the Irish dairy herd from 1.1 million to 1.5 million over just a few years”.