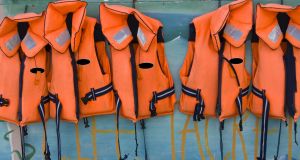 The Marine Casualty Investigation Board has recommended that recreational craft operators be reminded of their requirement to wear a personal flotation device following an investigation into a drowning tragedy off west Cork. Image: iStock.

The Marine Casualty Investigation Board has recommended that recreational craft operators be reminded of their requirement to wear a personal flotation device following an investigation into a drowning tragedy off west Cork.

The board said Minister for Transport Eamon Ryan should issue a Marine Notice reminding people of their statutory requirement to wear a flotation device on all boats of less than 7m in length.

The recommendation followed an investigation into the death of 23-year-old fisherman Kodie Healy from Durrus, who drowned while fishing in Dunmanus Bay on October 9th 2019.

The investigation established that Mr Healy departed Dunmanus Harbour at 8am on the day in question to go sea angling in the bay aboard his 5.6m open deck boat, Tommy R.

The alarm was raised when he failed to return at 8.27pm that day and a search began. Wreckage of the boat found at Drishane Point on the northern shores of the Mizen Peninsula at 9.59pm that night.

A major search operation was launched and Mr Healy’s body was found by divers in an undersea gully off the northwest side of Carbery Island at 4.19pm on October 13th.

A postmortem found that Mr Healy died because of cardio-respiratory failure due to drowning. It established that there were no signs of alcohol or drugs in his system.

The board concluded that the most probable cause of Mr Healy’s death was that sometime after 1pm on October 9th, he fell overboard from the Tommy R, close the northwest shore of Carbery Island.

The boat’s steering would have been uncontrolled and it would have come into close proximity to rough seas northwest of Carbery Island and been overwhelmed, broken up and sunk, it found.

There were a number of factors that contributed to the tragedy, the board said, including the fact there was adverse weather, a small craft warning in operation and rough seas in Dunmanus Bay on the day.

Another factor was that Mr Healy, who had a full certificate of competency for fishing vessels and was on his day off from his regular job, was operating on his own in very dangerous seas.

Significantly, he was not wearing a personal flotation device while the Tommy R was not suitable for the sea conditions existing in the vicinity of Carbery Island on the day in question, the inquiry noted.

Mr Healy, from Cashalane, Durrus, who is survived by his parents, John Paul and Samantha and siblings, Patrick, Finnian, Suannie and Eden, was buried in Schull Cemetery following a funeral mass at Lowertown Church.