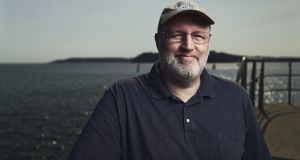 Brett Phaneuf, director of the Mayflower Autonomous Ship project. “To be honest with you we’ll probably be the only ship at sea that does stick to the maritime regulations”

Some 400 years ago a ship called the Mayflower – commanded by one Christopher Jones and with 102 passengers and 20 crew aboard – made the hazardous crossing from Plymouth on the south coast of England, to Plymouth on the east coast of Massachusetts, USA.

In doing so the European colonisation of the North American continent was truly inaugurated, and history, myth and legend began to coalesce.

IBM is looking to recreate the voyage, but to do so in a rather different fashion. From hundreds of souls aboard a leaky, vulnerable wooden sailing ship for two months, IBM wants its modern-day Mayflower Autonomous Vessel to complete the crossing in 12 days with not a single human aboard.

Originally scheduled for September 2020, the crossing has been postponed until spring 2021, largely because of Covid-related hold-ups. Then again there’s a corollary with the original Mayflower crossing – the first ship that the “pilgrim fathers” tried to take across the Atlantic sank from under them.

Working with marine research organisation ProMare, IBM has created a triple-hulled vessel (a trimaran in naval parlance) powered by a mixture of sail, electric motors (drawing power from solar panels) and a back-up diesel generator.

You would expect any ship taking to the high seas these days to be equipped with the latest in GPS and radar, but the new Mayflower is also going to try and make it across the world’s most unfriendly ocean with not a single human being on board.

The vessel will have the latest IBM artificial intelligence(AI) systems. When it is way out at sea its ability to send back data to its mission controllers will be extremely limited, so the ship will literally have to think for itself to navigate and survive the capricious North Atlantic.

“The most difficult navigation component, where we need artificial intelligence, is in proximity to other things that we could hit or that could hit us,” says Brett Phaneuf, director of the Mayflower Autonomous Ship project.

“So working with IBM using their state-of-the-art tools gives us a routing where we understand our posture relative to all the other potential things in the area.

“To be honest with you we’ll probably be the only ship at sea that does stick to the maritime regulations! The problem is that people don’t follow them. And we’ve actually had these almost bizarre discussions with the MCA – the Maritime Coast Guard Agency – where they say, ‘well, if you’re following the regs and no one else is then you’re the risk’.”

That, Phaneuf reckons, is one of the problems of perception that autonomous technology must surmount the idea that in a collision between a human and a machine it’s automatically the machine that is in the wrong.

As well as proving that autonomous tech can safely and efficiently navigate and control itself, and as well as being a proof-of-concept for future drone-type shipping, the idea is also to pit the tech against one of the most merciless environments on Earth.

“Really, the most onerous thing is the ocean itself, right?” asks Phaneuf. “So, there are aircraft carriers on the bottom of the ocean. And there are ships the size of the Titanic down there, more than a few in fact. And so if it wants us the ocean will have us. No ship can be built big enough to withstand it.”

It probably helps that IBM owns its own AI weather forecasting service, The Weather Company, but beyond that the ship’s systems are designed to have multiple redundancy and backups should the worst occur.

As Phaneuf puts it, the AI controlling the ships is designed to “fail gracefully” – going from a full AI mode to a simpler automated mode as needed.

Mayflower can communicate from way out at sea, but the low band width of such communication systems limits it to a simple ASCII text message. The ship can be directly controlled when close to shore if needs be, but out among the waves it’s on its own.

“On one hand the objective is to create this specimen which is capable of crossing the Atlantic” says Jonathan Batty from IBM. “But, really, I think that the key objective is to create a set of technologies that will enable a different kind of ocean research vessel in the future. The vision is not for just one of these things to be floating around, but hundreds or thousands. If you’re an oceanographer it’s not practical to spend 24 hours remote controlling a vessel, so these things need to be independent and autonomous.”

The idea, says Phaneuf, is not to replace David Attenborough nor the research vessel named after him, but to allow such human and research resources to be more usefully and efficiently directed.

“If I want to know more about the climate I need more data. And to get the volume of data I need I need to reduce the cost of gathering it. So it’s great that we can have a Sir David Attenborough research vessel; a €60 million boat which costs tens of millions per year to run.”

He says there is a handful of research ships like that in the world, and they do great things. “But some times they waste their time, because occasionally they get a null result. And so we want to democratise our understanding of the global climate and the oceans. We can do it through the deployment of various tiers of autonomous and automated systems that feed the data back and provide us a better understanding of where we should target the manned assets.”

“So we’re trying to eliminate those things in some ways so that we can have more vessels collecting more data that help us to then target the more sophisticated human resources.”

Phaneuf also meets head on the issues of autonomy potentially reducing employment on the high seas.

“I suppose if you were a longshoreman you would not be particularly in favour of robotics, but I defy you to find a longshoreman today who wants to go back to a manually-powered crane from the medieval era either.”

Apart from creating swarms of robotic research vessels, IBM also has an eye on using its AI control systems to return commercial shipping to a more environmentally-friendly way of life. After all the Mayflower’s primary form of propulsion is wind power, and using AI systems allows in theory that to be controlled and utilised much more efficiently.

“There is a lot of scope for small vessels like this to actually take to inland waterways, rivers and canals” says Batty. “And you can imagine a scenario with 5G networks where these kind of vessels operating inland could actually take some pressure away from road systems for certain types of deliveries.”

He says there is a vast network of canals across Europe which are now pretty much only used for recreation. You could also deploy aerial drones for last-mile delivery, and it could completely transform the transportation system.

“The technology that underpins boats – wind and water displacement – are basically the oldest technologies we have” says Phaenuf. “But it still works, right? It’s timeless. And so it’s just being able to optimise it that matters.”