About one-third of Irish people are ‘unsure’ about getting Covid vaccine, recent survey shows 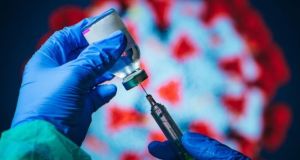 The Department of Health said the vaccine stocks it purchases via the European Commission will be required to meet ‘rigorous international safety standards’.

Health officials are developing a public communications strategy ahead of the roll out of a Covid-19 vaccination programme, amid concerns that public scepticism could threaten to undermine crucial participation.

Views on how a vaccine will be received are mixed from those who predict pent up demand, to others who say distrust poses a genuine threat to the levels of immunisation required to protect the overall population.

Last month, an Ipsos MRBI survey found that one-third of people are “unsure” about getting vaccinated while 12 per cent said they would not participate.

Separate to hard line “anti-vax” views, much of the scepticism around coronavirus vaccines is due to the speed at which they have been developed.

Dr Eoghan de Barra, a consultant in infectious diseases at the RCSI University of Medicine and Health Sciences, who has conducted research in vaccine development, said he would be “very concerned” about public confidence.

“No matter what vaccine we have, if we don’t have people taking it up in [sufficient] numbers it won’t work,” he said, stressing that while development has been accelerated, the same processes have been followed as in other vaccines.

“There is an onus on us to offer people the data and the evidence and the reassurance as to how these work … we know that when vaccination rates falter we get a re-emergence of cases.”

Dr Gerald Barry, a virologist based at University College Dublin, explained that not everyone who gets vaccinated becomes immune.

If the reproduction rate, or “R number” of a virus in the population is as high as four – with no mitigating factors such as social distancing or mask wearing – scientists estimate that about 75 per cent of the population would need to be immunised in order to achieve so-called herd immunity.

If a 90 per cent effective vaccine was employed (such as that suggested in early Pfizer testing) then about 85 per cent of the population would need to be vaccinated – a level that illustrates the mammoth task at hand in terms of public take up.

Confidence, Dr Barry said, is a “big concern” – he has already fielded questions over vaccine safety from his own medical students.

“From now on it’s going to become [a public question of]: should we take the vaccine, why should we take it, can I trust it? There is the PR approach that has to be taken to convince people that it’s safe but it can be very hard to change people’s mind.”

The Department of Health said the stocks it purchases via the European Commission will be required to meet “rigorous international safety standards”.

Although the department did not elaborate, it is likely to focus on the strength of the scientific and medical process.

Kingston Mills, Prof of Experimental Immunology at Trinity College Dublin, said any vaccines that ultimately arrive on the market will be subject to strict safety guidelines by both the European Medicines Agency and the Food and Drug Administration in the US, built around strong performance data.

“I think we need a PR campaign to explain to people how this vaccine is assessed for safety and the benefit, especially if it prevents people from dying,” he said of the need for large societal participation.

Prof Sam McConkey, head of the RCSI’s Department of International Health and Tropical Medicine, and a familiar media voice during the pandemic, moved to discourage fears of long-term side effects.

“Most of the side effects from most [other medical] products we have happen very soon after you take them, in the first few days. You don’t expect five or 10 years later to get a side effect,” he said in a recent RTÉ interview, in which he discussed public suspicion of the new Pfizer vaccine.

Scepticism is not new. Ireland has experienced it most recently with the HPV vaccine against cervical cancer, while links between MMR and autism have been debunked. Whatever public campaign health authorities in Ireland pursue they will face a challenge.

Tim Kinsella, managing director of MKC Communications, said messaging would be “immensely difficult” but very much related to whatever level of trust the Government and health authorities have managed to build to date.

“There are parts of the population that simply don’t trust their government so just because the government says you need to take your medicine it doesn’t mean they are going to do it,” he said.

“My gut feeling is that most people still believe and trust what the Government is saying.”

He noted too the transactional benefit of the message – a vaccine will almost certainly lead to improved quality of life in a world crippled by pandemic restrictions.

Whatever the concerns of the public, and by consequence the medical and scientific communities, doctors on the frontline are upbeat.

Dr Mary Favier, president of the Irish College of General Practitioners, said its members are generally confident as a greater demand for the regular flu vaccine this year is seen as a proxy indicator of anticipation over one that can target the coronavirus.

She acknowledged the existence of a “cohort of anti-vaxers”, as well as “valid” scepticism among other parts of society given the speed at which the vaccine has been developed. But the bigger issue, she said, will be how they manage a drip feed in supply.

“From a patient point of view there is extraordinary interest in the vaccine,” she said. “People will be lining up … it’s not something we need to sell.”