Rise in seizures appears to show growth of knife-carrying culture

Garda data reveals increase across State, despite crime slide due to Covid-19 lockdown 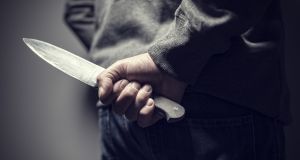 Knife seizures have continued to increase this year despite the Covid-19 lockdown, with one in six knives seized by gardaí taken from children aged 12 to 17 years.

Seizures increased by one-third in the period between 2017 and last year and that trend has continued in the first half of this year despite many other crime types having plummeted due to lockdown.

Overall, knife seizures increased by 13 per cent, to 1,214 seizures, in the first half of this year, according to data obtained by The Irish Times from the Garda.

Garda sources said there was concern in the force that young people, mostly boys and young men, were carrying knives for “reassurance” after being the victim of assaults or because they feared they would be targeted.

“There is some evidence of young lads starting to carry knives as a group; a number of them all doing it when one starts,” said one source. “And it’s often because they might have a rivalry with another group of lads from the same area and that has been ratcheted up in some way, maybe after a fight.”

Other Garda sources believed some of the increase could be partly attributed to the Garda force growing to record strength in recent years. However, they noted the number of knives seized had been increasing year on year for some time and, coupled with assaults having reached record highs last year, street violence was now of real concern.

Minister for Justice Helen McEntee said data relating to the number of convictions for knife crime was not readily available, though she said the issue was being tackled in the same operation gardaí were running to focus on assaults.

Fine Gael TD Neale Redmond has previously raised the issue of knife crime with Ms McEntee in the Dáil and said the continued increase in knife seizures this year followed a 10 per cent increase in the number of stabbing injuries recorded last year, to 178 cases.

“Sadly, like in other countries, we are starting to see the full human cost of knife crime on our streets and deaths that can be prevented. We cannot be asleep to this growing problem,” he said, adding a knife amnesty should be considered.

While Dublin accounted for most knives being seized, at almost half the total number found across the Republic, some areas where knife crime was not regarded as a significant issue have begun to show signs that situation was changing.

The data for the first six months of this year reveals that across 28 Garda divisions, knife seizures have increased in 14 even though there has been less activity on the streets and the night-time economy, which is often associated with serious assaults, has been fully or partially closed for months.

In the Cavan-Monaghan Garda division there were 37 knife seizures in the first half of this year, compared with 53 last year, a 40 per cent increase based on six-month trends. In the three-year period to the end of last year seizures increased by 157 per cent in the division; from 21 seizures in 2017 to 53 last year.

In the Dublin south central division – which includes the south inner city and areas covered by Donnybrook, Irishtown and Kilmainham Garda stations – 209 knives were seized last year; more than any other Garda division in the country. In the first six months of this year 134 knives were seized there, a 28 per cent increase this year based on six-month trends.

In the Waterford Garda division some 46 knives were seized in the first six months of the year compared with 49 in all of last year; an 88 per cent increase based on six-month trends.