‘Something rotten’ at heart of Hiqa inspection system, claims TD 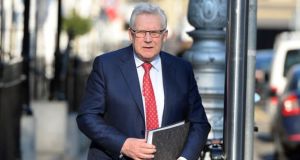 Fergus O’Dowd: ‘We all knew what had to be done but what didn’t happen here’. Photograph: Dara MacDónaill

A Fine Gael TD and nursing home campaigner has claimed there is “something rotten” at the heart of the Hiqa inspection system because of what he said was a five months delay in taking action over a Co Kerry home.

Louth TD Fergus O’Dowd condemned the Health and Inspection Quality Authority (Hiqa) for the way it dealt with the Oaklands nursing home in Listowel.

The last report on the Hiqa website about the home dated from June 18th.

“It is entirely unacceptable that that level of what I would call abuse of those patients was allowed to continue for so long.”

“There is something rotten at the heart of this system that that was allowed to continue.”

Mr O’Dowd said the HSE and Hiqa outlined that there were seven recent inspections at the home.

He said checked the website at 7pm on Thursday and the last report dated from June 18th “but it took Hiqa five months until Thursday to take action”.

“We all knew what had to be done but what didn’t happen here.”

That June report found there was no person in charge, no social distancing, no clinical oversight, inadequate food and nutrition.

“There was no appropriate medical management. The staff were wearing no surgical masks. There was no management system in place to provide safe and appropriate and constant care and there was very poor and unacceptable infection control.”

A draft report was issued to the nursing home on July 9th with July 30th deadline to comply.

The chief inspector was not assured by the documentation supplied, he said “but they waited until today to go into court after sixth deaths”.

Mr O’Dowd was speaking during a Dáil debate on the final report of the Oireachtas special committee on Covid-19.

He also called for a reversal of the privatisation of nursing homes.

“Twenty-two nursing homes changed hands last year where people from outside Ireland came here to invest. That to me raises a big warning flag.”

“We cannot have the privatisation of our nursing homes and care of the elderly.

“We must reverse that as we’re doing with housing and we must make sure the HSE steps in.”

He acknowledged that the exploitation occurred in a small number of homes but said it could not continue.