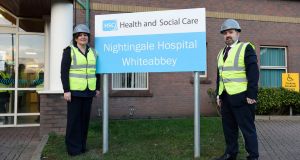 Northern Executive Ministers on Thursday night reached consensus on new Covid-19 restrictions that will extend the current ones past the first week in December and well into the start of the Christmas holiday period.

On a day when 12 more Covid-19-related deaths were recorded in Northern Ireland, taking the death toll to 901, Ministers agreed a new two-week “circuit breaker” that will extend the lockdown to Friday, December 11th.

On Thursday, Minister for Health Robin Swann presented Ministers with proposals that will involve a shutdown of hospitality, churches, non-essential retail, close contact businesses such as hairdressers and beauticians and the leisure and entertainment sectors.

All five Executive parties – including the DUP, which previously resisted such proposals – endorsed the measures, which will begin on Friday, November 27th.

Schools and childcare centres will remain open. Off licences can remain open up to 8pm. Takeaways and deliveries will be allowed. Weddings and funerals can take place with a maximum attendance of 25 in churches. Universities are advised to provide distance learning, except where face-to-face lessons are essential.

The Executive also pledged to provide a financial package over the coming days to assist those affected by the restrictions.

Mr Swann had warned fellow Ministers that failure to take action would result in a “significant increase” in Covid and non-Covid deaths by mid-December and hospitals being “overwhelmed”.

Following four days of wrangling last week the Executive finally settled on a compromise whereby, rather than an extra two weeks of lockdown from November 13th – as recommended by Mr Swann and his advisers – restrictions would run for a further week followed by a phased reopening of the hospitality sector.

On this Friday, cafes and coffee shops as well as hairdressers and beauticians were due to reopen, while the following Friday, November 27th, pubs, hotels and restaurants were scheduled to be back in business.

The coffee shops and hairdressers can open for a week from this Friday but must close for two weeks from next Friday, November 27th.

That initial compromise resulted from a DUP refusal to sign up to the extra two weeks of restrictions, as proposed by Mr Swann on advice from chief medical officer Dr Michael McBride and chief scientific adviser Prof Ian Young.

Over Wednesday and Thursday, however, the DUP moderated its position. Senior party members such as MPs Jeffrey Donaldson and Gavin Robinson indicated that, as the R number had increased from 0.7 to 1, the party now could tolerate extended restrictions to try to curb the spread of the virus.

On Thursday the North’s Department of Health recorded 487 new confirmed cases of coronavirus, bringing the total since the outbreak of the pandemic in Northern Ireland to 48,716.

The latest figures showed that hospital bed occupancy was at 100 per cent, with 456 patients being treated for the virus.

Of these, 41 are in intensive care units, with 32 on ventilators.

The overall seven-day Covid figure for Northern Ireland is 181 cases per 100,000 of population.

Meanwhile, the Department of Health said Northern Ireland was expected to receive up to 4.3 million doses of two coronavirus vaccines once they received official authorisation. The department said the North would take 2.85 per cent of the total amount of vaccine provided to the UK.

The North’s chief pharmaceutical officer, Cathy Harrison, told the Assembly health committee that she didn’t anticipate any post-Brexit problems over getting Covid-19 vaccines into Northern Ireland when they come on stream.

Ms Harrison also did not expect any all-island distribution of the vaccine, although some co-ordination on the issue between the two jurisdictions was thought likely.