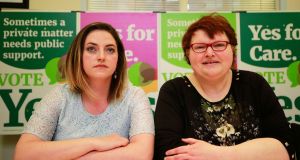 The Eighth Amendment to the Constitution discriminates against women with disabilities and those with mobility issues for whom travel for abortion is more difficult, campaigners supporting its repeal have said.

At a joint press conference on Monday, Together For Yes and Inclusion Ireland, an advocacy organisation promoting the rights of people with an intellectual disability, called for a Yes vote in next month’s referendum.

Speakers highlighted what they said was the harm caused to women with disabilities by the presence of the Eighth Amendment in the Constitution.

They said it created additional barriers to care, including inaccessible travel options and the expense of travelling for abortion for people for whom poverty was more likely.

There was also an impact on the privacy of those who might need support to travel, and women with disabilities often had complex health needs which made surgical abortion more likely.

Minister of State with responsibility for disability issues Finian McGrath said disabled people “should always be free to make decisions about their personal and private lives”.

He said that speaking as a minister and as a father of a daughter with an intellectual disability, he did not think it was right to “exploit” children with Down syndrome in the anti-choice campaign.

This implied that, given the choice, parents of children with disabilities would have chosen to abort, he said.

“There is no evidence that the repeal of the Eighth Amendment will see a decrease in children with disabilities being born. Laws that specifically allow for abortion on the grounds of impairment violate the UN Convention on the Rights of Persons with Disabilities.”

Ms Byrne said the amendment had a significant impact on the choices disabled people had in pregnancy, either if they were able to continue their pregnancy or if they wished to terminate it.

“It is vital for us that we can receive support for all these issues at home, including support to continue pregnancies and parent with appropriate supports and choice, as well as access to compassionate healthcare if we need to terminate the pregnancy.”

Dr Mark Murphy, chairman of Together for Yes, said women with disabilities, like all women in the Irish State, should be able to make “private, personal” decisions about their own healthcare, particularly in a crisis. He said it was very difficult for him, as a GP, to stand over the lack of access to care for his patients who had disabilities.

Ms Nevin said there had been “little or no attention given in the referendum debate to people with disabilities and our challenges when it comes to accessing abortion services”.

There were 143,000 women and girls of childbearing age living with a disability in Ireland and all of them were disproportionately affected by the Eighth Amendment, Ms Nevin added.

She said pregnancy for people with disabilities could mean “further disability or even death”.

Three women a day were taking abortion pills at home, “suffering in silence and taking their health and their lives into their own hands”.

“Nobody does this unless they can’t see another way. It is a big decision, never done on a whim,” she said.

“We have to untie the hands of our doctors so that people don’t take these risks.”