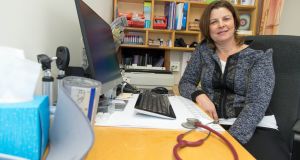 Dr Mary Favier said attitudes among GPs in Ireland towards abortion have changed over the past 15 years. Photograph: Michael Mac Sweeney/Provision

A significant majority of general practitioners now favour repeal of the Eighth Amendment, marking a significant change in doctors’ views over the past 15 years, according to long-time campaigner for abortion services Dr Mary Favier.

She says the death of Savita Halappanavar in 2012 proved a watershed moment for GPs, as much as for the general public.

“The death of Savita Halappanavar: that was the watershed moment – as much for GPs as for society at large,” she said. “There were just so many people upset, right-minded people who just said: ‘Oh my goodness, that’s dreadful, how could this possibly happen?’ ”

Ms Halappanavar died at University Hospital Galway a week after she presented with back pain and was found to be miscarrying, 17 weeks into a pregnancy. Although the pregnancy was not viable, her requests for termination were refused because there was a foetal heartbeat. She then contracted sepsis and died of multi-organ failure and septic shock.

Dr Favier believes attitudes towards abortion have changed over the past 15 years, not just in Irish society but among GPs who are set to be to the fore in providing the service if the amendment is repealed and legislation is introduced.

A GP on the north side of Cork city, Dr Favier founded Doctors for Choice along with Dublin GP Dr Juliet Bressan and midlands-based psychiatrist Dr Peadar O’Grady around the time of the 2002 referendum to remove the threat of suicide as a legal grounds for abortion within the State.

There would have been a time when if I was trying to introduce the subject at a doctors’ meeting, people would be quietly respectful but nobody would come up and say: ‘Well done'

“The people, we knew, were pro-choice, but there was a complete domination within the medical profession of a conservative, Catholic, male, older voice and we were sick of the fact that the profession reflected only that one voice, so we founded Doctors for Choice,” Dr Favier said.

Some 15 years ago the group had a membership of between 50 and 100, whereas now it has more than quadrupled in size. There has also been in a change of mindset among GPs – something she attributes as much to a generational as a gender change in the profession.

“There would have been a time when if I was trying to introduce the subject at a doctors’ meeting, people would be quietly respectful but nobody would come up and say: ‘Well done.’ They might text you, but say nothing publicly, whereas they are much more comfortable talking about it now.”

Recently elected vice-president of the Irish College of General Practitioners, Dr Favier recalls an AGM of the Irish Medical Organisation in Killarney some years ago where conservative IMO members succeeded in defeating three motions calling for abortion services. But she believes such days are gone for good.

“Times have changed and I don’t see as many GPs available for debate on the other side; and there are a number of social media fora and I have nothing but a positive experience of those. There are some vocal objectors but they are always the same people and you know who they are,” she said.

“I just think the day is over where people can be intimidated into thinking women don’t deserve a high standard of healthcare. We’ll be involved in a Doctors Together for Yes campaign and I expect it will prove popular, reflecting a significant majority of doctors being in favour of repeal.”

Notwithstanding her estimate of majority support among GPs for repeal, Dr Favier has no difficulty with the insertion of a conscientious objection clause in any legislation for any doctors who feel they cannot carry out a termination. However, she believes the conscientious clause should be confined to doctors.

What woman would want to go to somebody who is doing this under duress? It’s difficult enough as it is

“I think you have to have the conscientious clause even though there is a difficulty where you allow that to begin and end – what is generally the case is that the doctor giving the advice and writing the prescription is allowed object but you can’t have others working in the practice objecting,” she said.

“It would be an impossibility if you were to allow, say, the person who makes the appointment to object and that’s how it is in other countries. But there should be a clause for doctors. What woman would want to go to somebody who is doing this under duress? It’s difficult enough as it is.”

According to Dr Favier, it is mostly GPs who have led the campaign within the medical profession for repeal as they are the ones in the front line who see women in distress with crisis pregnancies before and after they travel to the UK for terminations.

“It has changed a little in terms of gynaecologists and obstetricians – they have had some very difficult cases that have been affected by the Eighth Amendment and a number of high-profile obstetricians have really said this has to be different because women’s lives are being seriously compromised.

“There’s a realisation we all need to work together to resolve this issue and the sooner we get a proper, good, evidence-based service the better and then it just shouldn’t be an issue any more and we shouldn’t have to spend so much time on it – I don’t want to be at this for a lifetime.”