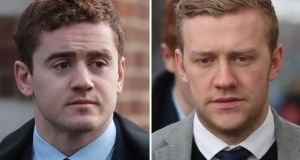 A former Ulster and Irish international has called on rugby authorities to explain why they sacked Paddy Jackson and Stuart Olding.

Paddy Wallace says Ulster Rugby needs to come out and make “very clear” why it came to its decision to revoke the pair’s contracts, following their acquittal in a high-profile rape trial.

On Saturday, Ulster Rugby and the IRFU released a statement saying the players’ contracts had been revoked with immediate effect.

Following the Belfast rape trial verdict on March 28th, Mr Jackson (26) and Mr Olding (25) were found not guilty of raping a woman at a house party at Mr Jackson’s south Belfast home in June 2016. Mr Jackson was also cleared of sexual assault.

A third player Craig Gilroy, who was not involved in the trial, was suspended for two weeks for sending one of the offensive messages that was outlined to the court.

However, some details of the trial, including degrading and offensive Whatsapp messages exchanged between the players and their friends, including Mr Gilroy, were areas of concerns for a range of sponsors of the sides, women’s rights activists and many in wider society.

The statement issued by the IRFU and Ulster Rugby, said: “Following a review, conducted in the aftermath of recent court proceedings, the Irish Rugby Football Union and Ulster Rugby have revoked the contracts of Patrick Jackson and Stuart Olding with immediate effect.”

“It has been agreed, as part of this commitment, to conduct an in-depth review of existing structures and educational programmes, within the game in Ireland, to ensure the importance of these core values is clearly understood, supported and practised at every level of the game.”

Mr Wallace said he was sure fans would welcome Mr Jackson and Mr Olding back to Ulster’s Kingspan stadium if they return with another club against their old side.

“The decision itself was probably the decision that had to be made, given the public pressure that was mounting and the sponsorship issue,” he said.

“I think there is a sense among the fans that they have been left in the dark.

“Quite a vague statement has been brought out. Just gauging the temperature of the supporters clubs, they feel they need a bit more information as to how they came to that decision.

“I have my own views on that obviously, but I think someone from Ulster Rugby needs to come out and make that very clear.”

Mr Wallace said a large majority of official supporters clubs have been left “very disappointed” and “sad probably just to see the two players moving on.”

“I think that is because they are fans of the game and they probably feel these guys have been acquitted and are being judged on their text messages, which were obviously completely out of order,” he said.

“I think that is the core issue here and that is why they are moving on.”

Mr Wallace said Ulster Rugby now has an opportunity to rebuild itself as a brand and for the players to move on.

“It is probably best on both counts that [Jackson and Olding] go elsewhere to ply their trade, and I don’t think they will be short of offers either,” he told RTÉ’s Today with Seán O’Rourke show.

Mr Wallace said Mr Jackson and Mr Olding “will be able to start again and rebuild their careers” and could come back to Ulster’s Kingspan stadium “in another jersey on some European night”.

“I think time is a healer and if that day comes around hopefully it will be down the track,” he said.

“They have come out and apologised for their involvement and their actions and they need to be allowed now to rebuild their lives and start again.

“In the odd chance that they ended up coming back here in a European cup game, with another club, I’m sure the supporters within the Kingspan stadium will welcome them back.”