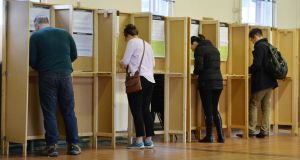 Get them out to vote: the first stage of the campaign will focus on asking people to visit the checktheregister.ie website and to add their names to the register. Photograph: Alan Betson

Advertising agency BBDO Dublin has won the account to promote voter turnout in the forthcoming referendum on the repeal of the Eighth Amendment.

The agency has been tasked by the Referendum Commission with explaining in a factual manner what the referendum proposal means and prompting people to vote. It is a significant new client for BBDO and its chief executive Neal Davies, who took over the role last year.

The first ads in a four-part Referendum Commission information campaign to maximise voter turnout on May 25th will start appearing this week.

The advertisements will have a particular focus on the message “Everything your vote means” and “Your vote means everything”.

The first stage of the campaign this week will focus on asking people to visit the checktheregister.ie website and to add their names to the register if they are not on it, ahead of a deadline of May 8th.

Advertisements will run across television, press, digital media, social media, radio and on out-of-home billboards in a bid to reach “all corners of Ireland” with this message.

A second “announce and inform” stage of the campaign, which will begin on April 23rd, will provide voters with more detail on the referendum proposal and direct them to further information.

These ads, which will run up until the day of the referendum on May 25th, will once again appear across different media, including on video-on-demand services and the advertising-supported version of music streaming platform Spotify.

A “supplementary” phase titled “motivate and plan” will back up the original registration message up until the deadline, while a fourth and final phase will focus on encouraging a strong turnout of voters.

The account is a high-profile one for BBDO Dublin, which until last November was known as Irish International BBDO. The long-established agency, based in Sandymount in Dublin, is part of the global advertising network BBDO Worldwide.

Its other clients include Guinness, Barry’s Tea and Mars, while it has won multiple awards for its information campaigns for the HSE Quit campaign and the Road Safety Authority.

The Referendum Commission, established at the end of March, is chaired by Isobel Kennedy, a high court judge. Its other four members are Peter Tyndall, the Ombudsman; the Comptroller and Auditor General Seamus McCarthy; Peter Finnegan, the clerk assistant of the Dáil; and the clerk of the Seanad, Martin Groves.

The commission, a “neutral and impartial” body, has no role in the regulation or oversight of the funding, spending or advertising by campaign groups in the referendum.