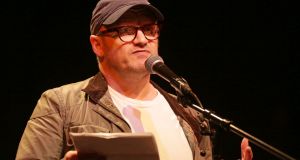 The Eighth Amendment is another great barrier on a road to an enlightened Ireland, Lenny Abrahamson told rally in support of the Repeal campaign in Dublin. Photograph: Laura Hutton

Oscar-nominated film maker Lenny Abrahamson has described the Eighth Amendment as a “national disgrace”, allowing for policy by an “impulse to control” rather than compassion.

Mr Abrahamson, who was speaking at a rally in support of the Repeal campaign in Dublin on Saturday, said the legal framework was indicative of the attempt of “old Ireland” to cling on and to deny a movement of change.

Likening the constitutional provision to aspects of conservative society such as the Magdalene laundries and industrial school, he said it was a symptom of the “old darkness”.

“The Eighth Amendment is a national disgrace and another great barrier on a road to an enlightened Ireland where policy is informed by rationality and compassion, not dogma and the impulse to control,” he said.

The Rally for Equality, Freedom & Choice was organised by Rosa (Reproductive rights, against Oppression, Sexism & Austerity) and held at Dublin’s Liberty Hall.

Mr Abrahamson, who was nominated for an Academy Award for his film Room, was the most high-profile speaker among a long list that included Dr Rebecca Gomperts, founder of the Women on Waves abortion movement; Bárbara Areal of Libres y Combativas in Spain; and Kátias Sales, a Brazilian women’s rights activist.

“The Eighth comes from the same root and impulse that gave us industrial schools and Magdalene laundries and that put children in the hands of those who abused and frightened them; that kept fear and ignorance where there should have been hope and life,” Mr Abrahamson said.

While there was validity to people’s individual religious views on conception, this, he said, should not be permitted to shape law.

“It is entirely a matter for the pregnant person to decide what they do with their body,” he said. “If your deeply-held beliefs make Irish women unsafe and unfree then I do not accept that they should be put into law.”

The former master of the National Maternity Hospital, Dr Peter Boylan, told the audience some of those who had worked to have the Eighth Amendment inserted into the Constitution “have severe reservations about what happened as a consequence of it” and that a number of them had told him they would vote for its repeal.

He said the amendment interferes with a doctor’s ability to treat women as they should.

“We have to make a decision in practice as to how close to death a woman must be before we can intervene to save her life by doing a termination of pregnancy,” he said.

“If we intervene too early we may be accused of performing an unnecessary termination and there may be [someone in the hospital] who can report us to the police and we can end up with a 14-year custodial sentence.” On the other hand, he said, if they wait too long a woman could die.

On the issue of abortion pills, Dr Boylan said he was aware of a case where a woman’s uterus had ruptured because she had taken the wrong dose – whereas their use is entirely safe with the correct medical supervision.

“There will be a woman who will die and then we will again be the subject of intense scrutiny by the world and not for a good reason.”