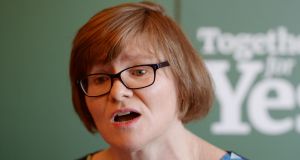 The National Women’s Council of Ireland (NWCI) has said data collection and analysis around domestic and sexual violence is at “crisis point” following revelations the Garda has been overstating the number of sex crimes reported to it by as much as 26 per cent in some years.

There had been concern for decades that only a small percentage of sex crime victims ever made a complaint to the Garda. But new statistics show the true rate of reporting is even lower than previously believed.

Orla O’Connor, Director of the NWCI said the current system of collecting data is “archaic and not fit for purpose”.

“NWCI has huge concerns that the number of women reporting rape, which was already thought to be as low as 10 per cent, is even lower than previously believed.

“Our criminal justice is failing to support women, and failing to hold perpetrators to account, because we do not collect or analyse data in an effective manner.”

Ms O’Connor said “gaps in our knowledge” are not limited to the Garda.

“It is a system-wide issue that involves all State services that interact with victims and perpetrators,” she said.

“We urgently need our State services - An Garda Síochána, Tusla, the HSE, the Courts Services and the CSO to come together to record data accurately, and importantly to share the data and subsequent analysis.”

Last month, the CSO revealed the number of homicides since 2003 had been underestimated by 18 per cent.

The Irish Times has obtained new figures - compiled by the CSO in conjunction with the Garda - for other crime types which were examined and revised at the same time as the homicide data.

In most categories the revisions made were negligible, but in the area of sex offending, the errors were much more pronounced.

For example, the Garda’s figure for sexual offences reported in 2003 was 1,986. The revised figure is 1,573, meaning the number of victims who came forward that year is 26 per cent lower than previously stated.

The CSO said part of the reason for the over-recording of crimes was because until now, if repeated crimes were committed by a person on the same victim, each incident was recorded as a seperate case.