Man (25) arrested in Republic after robbery in North

Suspect assaulted taxi driver with knife, forced him to drive over Border to Donegal 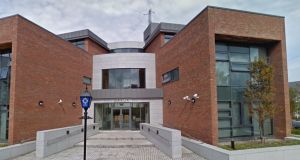 A 25-year-old man has been arrested in Co Donegal following a robbery in Northern Ireland on Saturday evening.

The Police Service of Northern Ireland (PSNI) said it received a report that a shop on Culmore Road, Co Derry, had been robbed at knifepoint at about 7.30pm on Saturday.

After the man left the shop, witnesses said he pulled a knife on a taxi driver and forced him to drive across the Border, according to the PSNI. The taxi was located near Muff, Co Donegal.

An Garda Síochána arrested the man and a sum of money was recovered from the vehicle.

It is understood the taxi driver was assaulted and injured during the incident and received eight staples to a wound in his head.

The arrested man remained in custody at Buncrana Garda station on Monday morning.