Without regular meetings relationships will decline, according to the Taoiseach 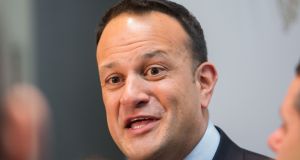 Taoiseach Leo Varadkar suggested to British prime minister Theresa May earlier this year that their cabinets hold annual joint meetings to bolster the relationship between both countries post-Brexit.

When Mr Varadkar and Ms May both visited Belfast in February, he suggested to her that an annual meeting involving all the ministers from both governments could act as a replacement for the regular engagements which currently happen in an EU context.

The Taoiseach said he had in mind an arrangement similar to the yearly meeting involving the French and German cabinets, which has reinforced their status as the two central powers in the European Union.

I proposed to prime minister May that once a year there could be a joint cabinet, just like the French and Germans do

He said the prime minister had received the suggestion positively. However, she gave no firm indication if she would be agreeable to such a scenario.

The Taoiseach disclosed the proposal in public for the first time during the course of an internal Fine Gael “town hall” meeting in Mountmellick, Co Laois last Friday.

Mr Varadkar said EU Council meetings ensured he could have one-to-one discussions with Ms May five or six times a year.

Referring to the post-Brexit situation, he said: “If you do not have those regular meetings and engagements, those relationships decline. We will have to make a special effort to keep a close relationship with Britain.

“I proposed to prime minister May that once a year there could be a joint cabinet, just like the French and Germans do.”

The Taoiseach’s spokesman said he was of the view that when the United Kingdom leaves Europe, there will not be the same level of interaction between both governments. He said that existing organisations such as the British Irish Council and other bodies had specific roles, many arising from the Belfast Agreement. An annual cabinet meeting would allow other issues fundamental to the political and trading relationship between both countries to be discussed.