Repealing Eighth ‘could lead to euthanasia and eugenics’ 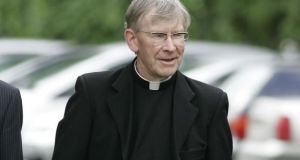 Bishop of Cork and Ross Dr John Buckley: he said the debate about repealing the Eighth Amendment had failed to make any mention of the “rightness” or “wrongness” of human behaviour. Photograph: Dara Mac Dónaill

Repealing the Eighth Amendment to allow for abortion in Ireland could pave the way for the introduction of euthanasia and eugenics, two Catholic bishops have warned.

Bishop of Cork and Ross Dr John Buckley said the debate about repeal had failed to make any mention of “the rightness” or “wrongness”of human behaviour despite all authorities on moral matters agreeing the deliberate taking of innocent human life was always wrong.

“We can be sure that if a society decides that human life is disposable at its beginning, it will not be too long before it decides the same for human life at its end...human life is sacred and precious...this is true in every moment of life from its first beginning to its natural end.”

In a pastoral letter on the right to life read out at all Masses in all 68 parishes in the diocese on Sunday, Dr Buckley said there was a danger people may confuse abortion with necessary medical intervention, which, he said, has never been denied to any Irish woman as a result of the Eighth Amendment.

“In 1983 the Irish people voted into the Constitution an amendment that would give the unborn child the same legal right as the mother. Under its provisions no life-saving treatment is ever, or legally can ever, be denied to an expectant mother.

“The Catholic Church has never taught that the life of the child in the womb should be preferred to that of the mother. A doctor may give any treatment that is necessary to either mother or child without deliberately intending harm to the other.”

Abortion, on the other hand, was a “deliberate medical intervention to end the life of an unborn child”, said Dr Buckley. He pointed out that the Supreme Court had ruled that the unborn baby enjoys only one constitutional right, namely the right to life, thanks to the Eighth Amendment.

Meanwhile, the Bishop of Kildare and Leighlin Dr Denis Nulty warned that repealing the Eighth Amendment would create an “abortion culture” in Ireland which could lead to the advent of eugenics, with serious implications for those with disabilities.

In a pastoral message read out in all 56 parishes in the diocese which covers all of Carlow and parts of Laois, Offaly, Kilkenny, Kildare and Wicklow, Dr Nulty said he could not agree with those who hold the view that a pregnant woman has “an absolute right to choose the fate of her pregnancy”.

He said he believed that life begins at conception, and it did not serve the truth to minimise the reality of abortion and how prevalent it can become. The “hard truth” was evident in statistics on abortion from the UK and elsewhere, he said.

“Once we deny the right to life of the unborn we can no longer defend ourselves from what flows from an abortion culture. For instance, we are in deep denial if we cannot recognise that an abortion culture fundamentally alters our attitude towards disability.

“I believe that a culture that permits abortion cannot be separated from a culture that seeks full control over the gift of life. In recent years I have the sense that we are walking with our eyes closed into an era of eugenics, unwilling to look where we are going but still continuing on.”

Meanwhile, the Bishop of Raphoe, Dr Alan McGuckian, has said in a message to Mass-goers in 33 parishes in his diocese that abortion was never justified, and an expectant mother, particularly if her pregnancy posed a serious crisis for her and her family, deserved the support of everyone around her.

“A mother may be informed her baby faces serious challenges or is perhaps terminally ill. She might be pregnant as a result of rape. In such cases recommending abortion might seem like a gesture of compassion. Even in those tragic cases the unborn child needs to be loved and cherished.”