Delays to Heuston services after horses hit by train 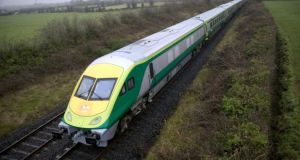 Irish Rail said at least one horse was seriously injured and veterinary support has been requested.

There are delays to all trains in and out of Dublin’s Heuston station on Thursday morning after a train struck horses near Adamstown.

Irish Rail said at least one horse was seriously injured and veterinary support has been requested. The train was not damaged but has had to travel at a reduced speed, causing delays of up to 30 minutes to all trains through Adamstown.

One passenger wrote on Twitter that she “waited 28 minutes for the 7:26 train from Clondalkin only for the station to announce, as it was pulling up to the platform, that there was no room on it.”

There are also southbound delays through Pearse station due to a points fault.