Call for endometriosis ‘centre of excellence’ to be developed 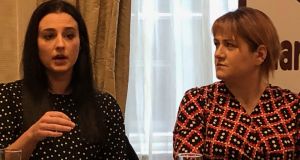 Sarah Moloney, who has endometriosis, and Kathleen King, chairwoman of the Endometriosis Association of Ireland, at a press conference to raise awareness of the condition in Dublin on Tuesday.

Women with endometriosis have called for more integrated treatment services and greater awareness of the gynaecological condition.

Despite the fact that it affects up to one in 10 women, many of those with endometriosis are forced to go private or go abroad in order to access effective treatment, TDs were told on Tuesday.

A centre of excellence to treat women with the conditions needs to be established in Ireland, the Endometriosis Association of Ireland said in a presentation to Oireachtas members in Leinster House.

Endometriosis occurs where tissue similar to the lining of the womb starts to grow in other places, such as the ovaries and fallopian tubes. A long-term condition, it can affect women of any age. Symptoms include pelvic pain, period pain, bowel issues and infertility.

Speaking at a People Before Profit press conference ahead of the presentation to TDS, the association’s chairwoman Kathleen King said that in 30 years of living with the condition, little has change in how it is treated.

Given the number of women with the condition, endometriosis needs to be treated as a specialty in itself, she said.

Jeanne Sutton said she was diagnosed with endometriosis while studying in Canada in 2011 but once back in Ireland was forced to go private for surgery in order to receive prompt treatment.

“I won €400 on Shane Lowry winning the British Open and used most of this on the down-payment for my surgery,” the Co Tipperary woman said.

“In the near 10 years since I was diagnosed, nothing has changed. Women are still in the dark about this condition and it is not good enough that all the work is left up to the Endometriosis Association of Ireland, which does not receive Government funding.”

Sarah Moloney, from Swords, first experienced symptoms in her teens but said it took years before she was diagnosed with the condition. She was put on the pill for years, then developed gut issues but only later was referred to a gynaecologist.

Dissatisfied with the treatment she was receiving in an Irish hospital, she travelled to a UK hospital last year and was diagnosed with stage 4 endometriosis and underwent a 5½ hour operation.

“I would like my story to educate women on what he treatment options are, to help them avoid the pitfalls of the treatment that is currently available and to let them know that there is hope of pulling back at least some of the life they had before their symptoms had such a profound impact on their lives.”

Gino Kenny TD, who organised the event, said women who suffer from endometriosis “are living in silence and the medical community have to take this more seriously”.