Areas of NRBU concern include Palmerstown, Sandymount, Clondalkin and Tyrrelstown 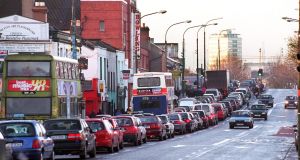 BusConnects plans to overhaul the bus system in the Dublin region by creating 230km of bus lanes and 200km of cycle tracks along 16 corridors. Photograph: Dara Mac Donaill

The latest BusConnects proposals while “not perfect” do ensure that most areas have access to “decent” public bus services, the National Bus and Rail Union (NBRU) has said.

In a submission to the National Transport Authority (NTA), seen by The Irish Times, the union notes that many direct services have been restored under the new plans but there remain a “number of contentious locations that are not best served”.

The areas of concern listed by the NBRU include Palmerstown, Sandymount, Clondalkin, Tyrrelstown, Bray and Kinsealy.

“The changes that have been made reflect the huge levels of anger that existed when the first-phase plan was mooted and that was reflective in the large attendances at vast numbers of public meetings arranged by politicians of all hues,” the union’s submission states.

“The phase-two proposals, while not perfect, do ensure that most areas have access to decent public bus service.”

In July last year, the authority published a redesign of the bus network and almost 50,000 submissions were made as part of a public consultation process.

Under the original plans up to 15 per cent of users would have lost their direct routes to the city, but this was reduced to 5 per cent in the latest proposals, published in October. Public consultation in relation to the updated plans closed on Tuesday. The new bus network is due to be implemented over a phased basis between 2021 and 2023.

In its submission, the NBRU said it wanted “resilience” in the bus network to cater for spikes in demand, and “to that end we are of the opinion that the frequency of the new direct services should have a baseline all day frequency of at least every 20 minutes”.

The union says “a main worry” is car-parking facilities at new transport hubs. “Although the wish is for everyone to use public transport, a proportion of people will drive to Blanchardstown and other centres,” it said. “We don’t want a situation where private car-park owners profit by fleecing commuters. Park-and-ride facilities should be priced into fares.”