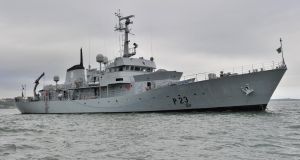 Details of how a decommissioned Irish naval vessel, the LÉ Aisling, sold by the Government for €110,000 in 2017, was bought by a Libyan warlord for $1.5 million (€1.35 million), are contained in a report that has been submitted to the UN Security Council.

The former Irish coastal patrol vessel has since been fitted out with three cannons it was originally designed to carry, and renamed the Al Karama (Dignity).

The ship is under the control of Khalifa Haftar, a long-time Libyan military commander who is the head of armed forces now engaged in the Libyan civil war.

Since an attack on the capital Tripoli by his forces in April, sanctions busting in Libya has increased rapidly and human-rights violations are becoming a greater issue, according to the report by the UN Panel of Experts on Libya.

They say they have now established the full supply chain for the former Irish vessel, which was sold to Haftar in breach of UN sanctions by a company based in the United Arab Emirates (UAE).

They say it was sold by the Irish Government in March 2017 to Russel Ventures Ltd, a company in the Seychelles that trades in the Netherlands as Dick van der Kamp Shipsales BV. The price was €110,000.

Renamed the Avenhorn, the ship was registered in Belize by the Dutch company on August 3rd, 2017, as a “patrol vessel”.

It was then sold in March 2018 to Universal Satcom Services, UAE, for $525,000, with Universal telling the vendors that it was intended the ship would be used for “counter-piracy” operations near Egypt.

Registration was transferred to Panama by the new owners, where it was described as a “pleasure yacht”.

“This was a deliberate mis-declaration by the new UAE owners,” the expert group said.

The UAE company later had the ship removed from the Panama registry, saying it was bound for demolition.

“This was another indication of a deliberate attempt to disguise the transfer of the vessel,” the experts said.

At the time the UAE company bought the ship, it had already agreed to sell it to the Ahl Ai-Thiqa Security and Safety Equipment Imports Company, of Benghazi, Libya, for $1.5 million.

The ship left Rotterdam, still painted the distinctive grey used by naval vessels, bound for Alexandria, Egypt, on May 4th, 2018.

When it was just south of Sicily, the crew was told they should divert to Benghazi as the ship had been sold.

The ship is now called the Al Karama and has been “dark”, ie no longer emitting its long-range transmission signal, since May 22nd, 2018.

The expert group included in their report pictures of the ship refitted with the type of cannons that been removed from it prior to its sale by the Irish State.

Mr van der Kemp told The Irish Times that he was told by the people who bought the ship that they were going to use it against pirates on the Red Sea.

“We sold it to someone we didn’t know,” he said. “They have an internet site. They look very normal. There was nothing suspicious about this client.”

The client said the ship was going to be used in the Red Sea for anti-piracy, “which happens a lot”.

There are a lot of private security companies involved in anti-piracy operations in that area, he said. “So there was nothing suspicious. Nothing.”

What had happened to the ship after he had sold it was beyond his control, he said. The profit made on the ship was “very disappointing”.

An email request for a comment to the UAE company met with no response by Wednesday evening.

In their report, the experts said the response they received from Reema Sami Abdullagh Al Omari, owner of the UAE company, was “contrary to some known facts” and lacked the depth of detail required.

“The panel finds that Universal Satcom Services FZE and its owner, Reema Sami Abdullah Al Omari, are both in non-compliance with paragraph 9 of resolution 1970 (2011) for the provision of military material to Libya.”

The report shows that Mr van der Kemp emailed Ms Al Omari to in May 2018 to say he had read reports that the ship was in Libya.

“I received a good offer to sell the ship to the Ministry of Transportation in Libya during the journey to Alexandria – so I decided to sell it,” Ms Al Omari replied.

“Please keep me updated about any vessel that you might have to sell in the future. I might be able to sell it for you.”