Under proposed legislation, secret ballot would not be necessary ahead of action 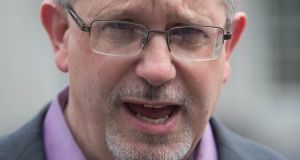 New legislation to allow workers to engage in political strikes is to be proposed in the Oireachtas this week by Solidarity TDs.

The proposal would also restrict the right of employers to secure court injunctions to prevent industrial action taking place.

Under the proposed new legislation, it would no longer be necessary for a secret ballot to be held ahead of a strike. Balloting would be based on rules of individual trade unions.

The proposed new Bill would also allow individuals other than employees of a company and their trade union representatives to take part in a picket. It would also remove the requirement for pickets to take place in the approach to a workplace rather than directly at or outside a workplace.

The proposed amendment to the existing 1990 industrial relations legislation was launched on Wednesday by Solidarity TD Mick Barry. It was backed by the National Ambulance Service Representative Association (a branch of the Psychiatric Nurses’ Association) and by the construction branch of the Unite trade union.

The Bill will be moved in the Dáil on Thursday.

Mr Barry said the proposed legislation aimed to end the de facto ban on political strikes, to remove “State interference from trade union balloting and to remove grounds in which anti-strike injunctions have been sought”.

He said this would allow workers to engage in strikes over housing or climate or against racism or sexism which would currently be outside the law.

“Political strikes or solidarity strikes are effectively illegal in this country. The Dunnes Stores anti-apartheid strike or the PAYE tax strikes of the 1970s would probably be banned today.”

Mr Barry said it used to be argued that the harshest anti-union laws in Europe were those introduced by the Thatcher administration in the UK. However he said Ireland “runs the UK pretty close now”.

“For example Ryanair pilots were prevented by the Irish courts from striking this year while their counterparts in the UK were free to place pickets. The State interference in trade union balloting procedures has to end.”