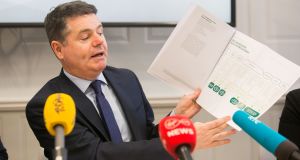 In future a final decision on a major public capital project will only be given by the Government when the tendered cost is known and figures are available for all associated risks, Minister for Public Expenditure Paschal Donohoe has said.

The Minister on Wednesday launched an updated public spending code which takes into account lessons learned from the major overrun on the new national children’s hospital.

The public spending code is a set of rules, procedures, and guidance which seeks to ensure that value for money is secured in major public projects.

The revised public spending code will provide for additional assessment phases of projects. This is aimed at allowing more opportunity for risks to be identified and presented to the Government or individual departments.

Mr Donohoe said that as part of key changes to the existing code there will now be a requirement for a strategic assessment of projects to be carried out before a business case is drawn up to capture the risks involved.

There will also be a preliminary business case phase which the Minister said would look at all of the key costs and consider the economic impact of the project and not just the financial risks.

He said there would also be a final business case drawn up after the tendering process was completed which would provide another chance for the Government or a government department to decide on how or whether the particular project went ahead.

For very large projects costing more than €100 million, there will now be an additional assessment stage: an independent appraisal carried out involving experts or specialists who were not involved in drawing up the earlier business case .

Mr Donohoe said the updated spending code was going to be needed in the future as the Government had to deal with both cost inflation in the construction sector and with a number of exceptional, costly and complex projects particularly in the transport and climate changes areas.

However he did not believe that the new requirements would lead to delays to capital projects set out in the Government’s Ireland 2040 national plan.

“Major projects are complex endeavours. They take many years to develop and build, involve multiple public and private stakeholders, and the management of complex challenges including physical, technological, legal, and environmental. Rigorous application of the updated public spending code will equip public bodies to anticipate, plan for, and overcome these issues. Application of this code will allow the promise of public investment to be pursued within a sustainable financial setting,” he said.

He said the requirements of the updated public spending code would apply with effect from January 1st, 2020.

The Department of Public Expenditure and Reform said all elements of the update of the public spending code were designed to strengthen Ireland’s public investment management systems. It said the application of the principles in the code would reflect leading practice in this area internationally.

“The code brings a renewed focus to: gaining a more developed view of costs, risks and timeframes before committing to proceed with a project; tighter governance of key decision points during project preparation and delivery; ongoing updating of the business case for a project as it proceeds through design and planning phases; and continued scrutiny of affordability throughout the process.”

Driver may have travelled 22km with explosive device attached to car 19:08
Destitute in Dublin: ‘You are vulnerable in a tent. Nowhere is safe’ 18:43
Dublin homes within walking distance of park are worth more, conference told 18:08
Man who denies murdering he father says he was his mate 18:07
Court hopes to make final ruling on McNamara and Lowe insolvency arrangement 17:49