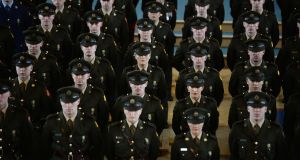 A package to increase the take-home pay of soldiers, sailors and aircrew is “not going to cut it” as it falls short of what is needed to retain members and drive recruitment, the groups representing Defence Forces personnel have said.

The Permanent Defence Force Other Ranks Representative Association (PDForra), which represents 87 per cent of military personnel, said it remains to be seen if the Public Service Pay Commission recommendations are enough “to retain members who have waited all too long and patiently for this report”.

The organisation is still “deeply concerned” with the Government’s approach to pay restoration, the consequences of which have impacted morale, recruitment and retention, it said in a statement.

“While some of the recommendations made by the commission go some way towards meeting the terms of the submission made by our association, in other instances they fall considerably short,” said its general secretary Gerard Guinan.

“Our association has pointed out on numerous occasions that there must be some correlation between pay and hours worked. This requires the urgent amendment of the current rates of duty allowances.”

Mr Guinan said the cuts have resulted in the early departure of thousands of men and woman, who were forced to leave for financial reasons. “The defence organisation will regrettably take a long time to recover from these losses.”

PDForra said it needed time to reflect on the report’s recommendations and to consult with its members.

“The association will now undertake a detailed review of the findings made by the commission. The national executive will meet in the coming days to consider the totality of recommendations made and brief our members thereafter,” Mr Guinan said.

Comdt Conor King, the General Secretary of the Representative Association of Commissioned Officers (Raco), said the proposals “are not going to cut it”.

“It’s not going to be enough to stem the exodus,” he said, adding that 1,200 Defence Forces personnel have left since Raco made its submission to the commission in February of last year.

In real terms, he said, the increase in the allowance is worth “about 96 cent gross a day for a private solider, about €1.30 for an officer and about €1.70 for a non-commissioned officer,” Comdt King said.

The Government has committed to carrying out a wider review of core pay and personnel retention within six months.

“I’ll believe it when I see it,” he added. “We don’t want to strike, we don’t want to leave the State floundering. What we do want is recognition of our loyalty and not to be left in the poorhouse.”

Fianna Fáil defence spokesman Jack Chambers said the commission’s report was unlikely to stop “the haemorrhaging of enlisted personnel that has been witnessed in recent years.

“Record numbers continue to leave and it has to be asked whether 96 cent per day before tax on military service allowance will entice a new entrant private soldier to stay? This will be the metric of a report that has a chilling finding that 60 per cent of enlisted personnel and non-commissioned officers have indicated they intend to leave in the coming two years.”

He said the cost of the increase, about €10 million, was barely a third of the €29.4 million under-spend in the Department of Defence pay budget in 2018.

Mr Chambers said the Government hamstrung the commission in preventing it from undertaking a general review of Defence Forces pay.

Labour defence spokesman Brendan Ryan welcomed the proposals but called on the Government to find a way to increase core pay.

“After three years of campaigning looking for the Minister for Finance to raise the basic wage of the Defence Forces, these small concessions are not enough.”

1 Tributes paid to Ireland’s deputy ambassador to China who died on Sunday
2 Coronavirus: No new Covid-19 deaths reported in State for first time since March
3 Coronavirus: What will reopen in Ireland’s phases to ease restrictions and what are the dates?
4 Unidentified man has been in Irish psychiatric hospital for 30 years
5 Dominic Cummings defends 400km journey and says he never considered resigning
Real news has value SUBSCRIBE