Explainer: Is there a ‘tsunami’ of home repossessions coming? 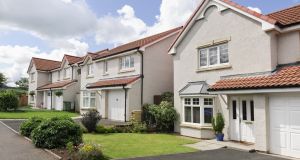 There is a legal mechanism that can work through the worst cases - and keep people in their homes. Photograph: iStock

Repeated warnings about a “tsunami” of home repossessions - long threatened, but yet to arrive - has raised doubts about the scale of this legacy problem from the decade-old economic crash.

At the time of the financial crisis there were 700,000-odd mortgages with outstanding debt of about €110 billion on the country’s books. More than 100,000 ended up in some kind of financial distress.

Tens of thousands of mortgages were restructured to help borrowers repay them over the past decade but there remains a large rump of mortgages that have never been fixed and seem unlikely ever to be repaid.

The latest statistics on mortgage arrears from the Central Bank, published last month, show that at the end of March there were about 28,000 mortgages on which repayments have not been made for two years or more.

These loans are in the worst category of mortgages - “in arrears over 720 days” - and make up the largest component of mortgage arrears cases. They represent the State’s biggest post-crash personal debt problem.

As for repossessions, the Central Bank’s statistics show that since September 2009 some 9,507 people have lost possession of their homes. Some 3,142 repossessions were as a result of a court order, while the majority, some 6,365, surrendered their homes voluntarily to their lenders.

So is there a wave of house repossessions coming?

Responding to Ulster Bank’s plan to sell 3,200 distressed home mortgages, David Hall of the Irish Mortgage Holders Association said on national radio on Wednesday that “this is where the tsunami begins.”

Mr Hall, who has repeatedly warned of “the tsunami,” said that people cannot afford to pay their loans or meet forbearance measures put in place to help them and would soon be without a home.

Looking at the Central Bank’s figures, this is undoubtedly on the high side. In reality, the debate is around what number constitutes a tsunami and whether it will actually arrive.

Personal insolvency practitioners, who help people resolve their unsustainable boom-time mortgage debts, said that there are thousands of people who need to be helped but that there are solutions to keep them in their homes. In many cases, it is the banks themselves throwing up obstacles to those solutions.

“It is there. You can visualise a tsunami coming but it is being stalled a couple of hundred yards off landfall,” said Mitchell O’Brien, the Dungarvan-based adviser and an authorised personal insolvency practitioner, or PIP, under the new personal insolvency regime set up by the Government in 2012.

This is forcing debtors to engage with financial advisers to help them deal with their debts. Legislative changes in 2013 grants debtors time to put a personal insolvency arrangement in place.

The Money Advice and Budgeting Service, or Mabs - and the Abhaile scheme it runs to help mortgage holders in arrears resolve their debt problems - coupled with the work of advisers - is giving debtors in trouble every opportunity to find a solution that will help keep them in their homes.

“Whilst it is true that there are many people who require help, there are solutions and alternatives. People just need to ensure they avail of them,” said another PIP, Ronan Duffy of Derry firm McCambridge Duffy.

Increasing property prices, complicating factors such as the tracker overcharging scandal and technical issues such as around court jurisdiction are holding back creditors from taking enforcement action.

So how many more people could lose their homes?

Answering this drifts into the realm of speculation given how little is known about the long-term arrears case beyond the top-line statistics.

Terry O’Malley, a Central Bank researcher, wrote in a September 2018 paper that, based on a sample of loans, the five main banks had proposed resolving two-thirds of long-term mortgage arrears cases potentially through “loss of ownership” by the borrower, though, he added, “this outcome is not guaranteed.”

Mapping this proportion onto the existing number of long-term mortgages cases would suggest that upwards of 18,000 borrowers still in the “arrears of 720 days” category could lose their homes.

This figure comes with a health warning: the Central Bank says this percentage was “just a flag in the banks’ systems rather than any action having taken place” and represented a sample of loans.

Are banks engaging with distressed debtors?

Personal insolvency practitioners, or PIPs as they are better known, claim that banks have largely disengaged with those in deep arrears as the lenders prepare to offload loans for sale in a bid to reduce their overall non-performing loans, or NPLs, to 5 per cent of loans under European Central Bank targets.

Are the banks wrong in claiming that people are refusing to engage?

Some customers certainly have not engaged. The State’s largest mortgage lender AIB recently wrote to some customers in long-term arrears warning them their loans would be sold if they did not engage.

PIPs dispute claims about the level of inaction by debtors, pointing to the Ulster Bank statement on the sale of the latest package of loans, showing that on average five “alternative repayment arrangements” were agreed over the past 75 months across the 3,200 home mortgages being sold by the bank.

Ronan Duffy said that banks gave many people forbearance measures but they “weren’t entirely altruistic as it sought to kick the can further down the road.” Many of these measures are coming to an end now.

“It was certainly never our experience that debtors we’re failing to engage. The notion of the ‘strategic defaulter’ was a myth,” said Ronan Duffy.

Courts Services figures show that the number of new repossession cases brought by banks and other creditors fell 52 per cent from 8,293 in 2014 to 3,941 in 2017. The number of possession orders issued by the courts has fallen steadily too, from 1,088 in 2016 to 878 in 2017. The reductions are attributed by the courts to debtors engaging with their creditors and dealing with their debt problems as the State’s formal personal insolvency solutions have become more workable.

So what can happen to the worst of the mortgage cases?

The High Court has been ruled on test cases, approving personal insolvency arrangements, or PIAs, that have opened the door to the write-down of unsustainable mortgages to current market value of homes outside of the courts process. The number of PIAs approved has risen dramatically particularly after 2015 legislation removed “the bank veto” on write-downs, increasing from 126 in 2014 to 959 last year.

Are banks still find ways to object to these deals?

Yes - the objections are often on highly technical issues on cases coming before the courts. This has slowed down the operation of the personal insolvency regime set up to address the worst cases as the banks challenge more innovative solutions such as debt-for-equity swaps where banks take an ownership share in the property. New PIA applications fell by 26 per cent to 2,970 in 2018 and they fell again slightly in the first quarter of this year, according to the latest figures from the Insolvency Service of Ireland, released last month.

What does the rising numbers of approved PIAs say about the system?

There is a legal mechanism that can work through the worst cases - and keep people in their homes. The increased numbers is due to forbearance arrangements coming to an end coupled with the sales of loan portfolio. For some debtors - as David Hall notes - reducing a mortgage to the current market value of the property through a PIA may not even be affordable and therefore is not a viable solution. In these cases, the mortgage to rent scheme, where the owner becomes a tenant of a housing body, may be a solution.

So what can someone deep in years-old mortgage debt and worried about losing their home do?

Seek advice and try to find a solution that works for them.