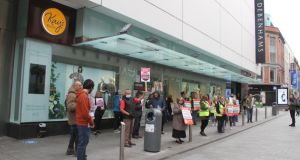 Former Debenhams workers fear there will be a “Clerys II” unless staff are given a redundancy deal by the company.

Debenhams Retail Ireland announced on April 9th that it was closing all 11 stores in the Republic of Ireland with the loss of 1,500 jobs.

It emerged that the company would not be paying staff any redundancy and that they would have to depend on the State for statutory entitlements.

Approximately 30 former staff demonstrated outside the Henry Street branch of Debenhams on Friday, organised by the Mandate trade union. Former workers picketed other branches of the chain store in the Republic.

Mandate is demanding that more than a million items of stock currently in Debenham’s 11 closed Irish stores should be sold and the proceeds, estimated at €25m, distributed to former workers as part of a redundancy deal.

Carmel Grouse, who has worked at the Henry Street store for 24 years first when it was Roche’s Stores and then Debenhams, said the closure of the retailer bore resemblances to what happened to Clerys staff in 2015.

Then 430 staff at the well-known Dublin city centre store were told in 2015 that they were being made redundant immediately and that statutory redundancy was all that was on offer. They had to wait two years for a settlement.

“What’s really upsetting is that people were calling us Clerys II. They said it wouldn’t happen again,” Ms Grouse said.

“We are trying to make Government aware of this. We don’t want to be Clerys II in four years time.”

Staff have been on the Government’s pandemic unemployment programme (PUP) since April.

Ms Grouse said the company still had assets in the stock and the value of the leases on its property along with a thriving online business.

Mandate representative Eoin Griffin said staff had voted for strike action though the business is closed.

Debenhams Retail Ireland Ltd is in the process of being liquidated by KPMG.

The parent company in the UK went into adminstration in April but has reopened all its stores in the country including its Northern Ireland operation in Belfast.

“The way that the business has been set up means that there are no assets for people there at the moment,” he said.

“People are in the process of making applications to the social insurance fund which is completely unacceptable. We have people who have given 30 years service to the company.

“They are looking at a statutory redundancy situation. There is money there. They have separated the Irish business from the British business. There is still money being made on the Debenhams brand from a loyal workforce.”

There was no response for a request for a statement from Debenhams Retail Ireland. However, previously, it stated that it had “no option but to apply to the court to have a provisional liquidator appointed following the withdrawal of the support of Debenhams Retail Ltd in the UK after it went into administration.

Despite entering into an examinership process in Ireland in 2016, it said the business has continued to make losses and its most recent audited accounts for the financial year ended September 2018 showed a loss of € 21.625m.

Debenhams set up in Ireland in 2006 when it took over the business of Roches Stores which retained ownership of most of the buildings housing its eleven shops including the Patrick Street store in Cork where it had been trading since 1919.

Solidarity TD Mick Barry said the incoming Government will have to deal with the issue.

“ Today’s nationwide protests are a sure sign that any new Government will be under pressure from the get go to deal with this issue and ensure a just settlement.”