Increase in over 60s using streaming services during lockdown 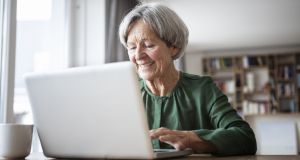 The number of older people watching online streaming services such as Netflix and the RTÉ Player increased markedly during the lockdown in March, according to new figures from the CSO. Photograph: Getty Images

The number of older people watching online streaming services such as Netflix and the RTÉ Player increased markedly during the coronavirus lockdown in March, according to new figures from the Central Statistics Office (CSO).

The number of people aged 60 and older watching online TV streams, such as the RTÉ Player, increased by 15 per cent between January and March, up to 46 per cent.

Some 37 per cent of the same age cohort reported watching video streaming services such as Netflix in March, compared with 29 per cent in January.

Across a range of fields surveyed by the CSO more people reported using online services, but only small increases considering the country was in effective lockdown from 12th March, with restrictions on non-essential movement.

Seventy per cent of internet users said they had watched videos on Youtube during a three week period in March, an increase of five per cent compared to January.

Streaming services such as Netflix and others were used by 57 per cent of people in the weeks after the lockdown was announced, the figures show.

Some 30 per cent of people said they had played or downloaded online games, an increase of seven per cent since January.

Men were more likely than women to read news online, according to the CSO figures published on Friday.

The increase in social media use was highest among people aged between 16 and 44, at 87 per cent of those surveyed, compared to 79 per cent in January.

Just under two thirds of those aged between 45 and 59 used social media to communicate with others in March.

Some 38 per cent of people reported uploading content online, such as posts, photos, music or videos to share with others. The number of people aged between 45 and 59 who said they had uploaded content almost doubled from 19 to 36 per cent in March.

The largest increase among this age cohort was from men, whereas broadly the same percentage of women reported uploading posts or photos.