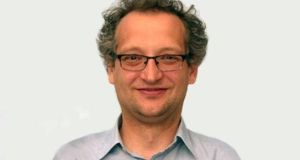 Peter Thorne is a professor of physical geography (climate science) at Maynooth University.

Achieving a 7 per cent reduction in carbon emissions annually in Ireland will not happen immediately, so “people have to give the government time to turn things around”, according to climate scientist Prof Peter Thorne.

The scale of action required was equivalent to turning a very large ocean-going tanker around, and changing direction of the whole economy, added Prof Thorne, who based at Maynooth University and is Ireland’s most senior scientist within the UN Intergovernmental Panel on Climate Change.

He said the programme for government was “a massive step change in ambition”, both in terms of climate action and addressing the biodiversity crisis. This was, in his view, a continuation of three to four years of increased national ambition.

It didn’t have absolutely everything needed, but if implemented “the programme would be massively beneficial”.

Covid-19 amounted to a systemic shock to the country and yet would probably only bring about a reduction of 4 to 5 per cent in emissions this year, he said. A lot of time and effort would be required to get sustained reductions over the next decade.

The parties negotiating the programme clearly had a lot of issues to deal with beyond climate. This was reflected in the inevitable give and take under agriculture. Because of immense economic aspects “you cannot tell farmers to stop increasing the national herd,” he noted.

Instead, “you come up with attractive alternatives to keeping cattle, and promote biodiversity in the sector. But you must also have government policy and instruments to do so,” Prof Thorne added.

There was enough in the programme under this heading if well managed, and if seen through and if there was buy-in from the agriculture sector. “But that’s a lot ifs,” he said.

Having a national land use plan as proposed; “knowing what land is used for, and what it should be used for, would be massively beneficial”, he believed.

On the issue of methane arising from ruminants (cattle) and sheep, Prof Thorne said there had to be a reduction in emissions and by extension in head count. While the greenhouse gas was short-lived in the atmosphere, 90 per cent of it was converted to CO2.

As a consequence a 2 per cent reduction in national methane emissions was required year on year. He accepted it was a very nuanced argument but such a reduction would mean biogenic methane would be stabilised.

But as a wealthy country, Ireland had to make a bigger contribution beyond reducing background methane, he insisted, by reducing emissions elsewhere as it was the only chance to keep global temperature rise to within 1.5 degrees.

He was believed “getting the legislative house in order”, as laid out in the programme, was the biggest item including a new Oireachtas committee on a par with the Public Accounts Committee and an independent Climate Advisory Council with legal powers. This would enable the putting in place five-year carbon budgets, which he said were “the bit of the puzzle that matters; everything comes out of that. This is the basis for long-term reductions”.

Meanwhile BirdWatch Ireland (BWI) welcomed “the radical move to reduce emissions by 7 per cent annually”, but pointed out “there are no clear targets, urgency, concrete actions or funding commitments to address Ireland’s biodiversity emergency”.

The programme for government had an opportunity to reflect scientific evidence and to bring back thriving biodiversity as a permanent feature of the Irish landscape through transformational policies, but has only touched the tip of the iceberg, it added. Sectoral safeguards for biodiversity were also missing.

BWI assistant head of policy and advocacy Oonagh Duggan said: “Biodiversity is finally on the political agenda but much more needs to be done to address the biodiversity emergency. We support the direction of travel of this programme for government and we will work hard with all parties to ensure that much more will be achieved for wild birds and their habitats, other biodiversity and a stable climate.”