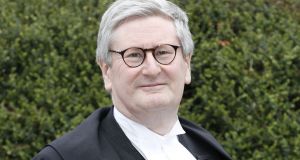 Mr Justice John MacMenamin: ruled the fact that the women, from Somalia and Uzbekistan, became Irish citizens did not deprive them of the right to apply for family reunification. Photograph: Collins

The Supreme Court, in an important judgment on two test cases, has ruled that two refugees who became Irish citizens are entitled to seek enhanced family reunification rights under the Refugee Act 1996.

The five-judge court’s unanimous judgment on Friday allowed appeals by two women refugees who later became Irish citizens over the Court of Appeal’s finding they were not entitled to seek enhanced rights under Section 18 of the 1996 Act.

The 1996 Act has been replaced by the International Protection Act 2015, which has narrowed family reunification rights.

The Court of Appeal ruled in March 2019 neither woman was entitled to the enhanced rights under section 18 because, as a result of citizenship, they are no longer refugees.

Overturning that decision on Friday, Mr Justice John MacMenamin ruled the fact that the women, from Somalia and Uzbekistan, became Irish citizens did not deprive them of the right to apply for family reunification under section 18.

The Minister’s interpretation of section 18 and other sections of the Act was “not logical” and would require section 18 to be interpreted restrictively “when the indications are that the intention of the Oireachtas was, then, to be generous”. It would also create substantial legislative uncertainty when the purpose of the 1996 Act was to achieve clarity, he said.

The Supreme Court’s interpretation of section 18 may not just potentially work to the benefit of the two but may also benefit up to 50 others similarly situated, provided they are otherwise eligible to avail of section 18, he said.

The judgment “may also set to rest concerns” about people who, as citizens, got family reunification here between 2010 and 2017, Mr Justice MacMenamin added.

During those years, ministers for justice operated on the basis of 2010 legal advice that refugees who became citizens could avail of section 18. In the women’s appeals, the Minister argued that legal advice was incorrect.

The Irish Human Rights and Equality Commission, which made submissions in the appeals focussing on the right to family unity under Article 8 of the European Convention on Human Rights, welcomed the judgment, which came on the eve of World Refugee Day, as a “positive and progressive ruling for refugee rights in Ireland”.

In the judgment, Mr Justice MacMenamin noted the Somali woman, aged in her 30s, got refugee status in 2008. Before she became an Irish citizen in 2013, she got permission for her children, her mother and her wards to join her here. After re-establishing contact with her husband in late 2016, she sought family reunification in respect of him under the 1996 Act but was refused on grounds of her Irish citizenship.

The second woman, aged in her 40s, got refugee status here in 2009 and citizenship in 2012 but was refused family reunification rights under section 18 for her eldest daughter and two grandchildren due to her citizenship.

Mr Justice MacMenamim said section 18 of the “innovative” 1996 Act, provides that a refugee, “in relation to whom a declaration [of refugee status]is in force”, may apply for family reunification.

The Minister’s “stark” position was that, as Irish citizens living here, the appellants could no longer be characterised as refugees under section 2 of the Act because they were no longer outside “the country of their nationality”, which country, the Minister argued, was Ireland.

The Minister argued in order to apply for family reunification under section 18, the applicant must still be a refugee within the meaning of section 2.

The Somalian woman had to flee Somalia, “the country of her nationality”, to seek refugee status but the Minister’s case was, on becoming an Irish citizen, her country of nationality became Ireland, he said.

The logic of that is that the “refugee” purportedly unable to avail themselves of the protection of the country of their nationality and in fear of persecution “in and by this State” is nonetheless to be understood as seeking to bring family members into this same State.

“That is not logical,” he said.

In addition to section 18, the 1996 Act conferred very considerable benefits, including to seek and enter employment, on those who got declarations of refugee status and this was also “telling” as a matter of interpretation.

The Supreme Court judgment, the judge stressed, “says nothing” about what is contained in the 2015 Act on the questions raised in the appeal.