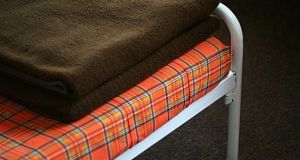 The draft programme for government contains a commitment to end to Direct Provision. Photograph: Getty

The incoming Government must ensure migrant integration strategies are cross departmental and do not remain solely under the auspices of the Department of Justice, the Immigrant Council of Ireland has said.

Equality and integration proposals made in the coalition’s draft programme for government should ideally be led by the department of the Taoiseach, said Pippa Woolnough from the council.

“There’s clear evidence we’re failing around integration. We have such an opportunity to listen to the spontaneous outpouring of personal experiences in Ireland and not make mistakes that will sow the seeds of potential tensions and segregations in the future. To avoid that we need to take action now.”

“This is a programme that would have been welcome 20 years ago,” said Ms Woolnough. “Now we need to be a lot more dynamic. Ireland is a diverse place, one in eight of us comes from a migrant background. What we should be seeing is integration strategies that are knitted in cross departmentally and ideally led by the Department of the Taoiseach.”

On Friday the Department of Justice announced €500,000 in funding for community integration projects to be carried out over the next year. The fund, which was established in 2017 to support local migrant and non-migrant initiatives, offers grants of between €1,000-€5,000 to projects around Ireland.

Some 124 locally-run projects were granted funding last year and the department is now calling for community groups to submit applications for the 2020 fund before July 16th.

James Gannon from the Friends of the Centre in Ballaghaderreen says the funding the group received last year was “vital” in providing support to Syrian refugees in the town’s Emergency Reception and Orientation Centre (EROC). However, while the group is grateful for the financial support, it actually needs a lot more money to properly operate projects for the local Syrian population, said Mr Gannon.

“The grant has been invaluable but we wish it was more. We’ve used it for football events, sports events, food events and some trips around the country. It’s absolutely vital support. The first year we had no money at all and had to rely on donations.”

The group uses some of the money to buy football boots for kids interested in sport at the centre.

“There are thousands of unused pairs of football shoes around the country in people’s homes that aren’t being used but we can’t get our hands on them. Sports gear can cost a lot.”

Graham Clifford, founder of Sanctuary Runners, says half a million euro could be used much more effectively to promote integration. He acknowledges that groups who receive the funding do important work but believes the overall project has “no mass impact on making Ireland a more integrated society.”

“What can anyone do with €2-3,000 that will have a lasting impact? Many local community development committees don’t have the expertise to use this money well. A lot end up spending it on developing a plan rather than actually carrying it out.

“If we are serious about community integration we need to be rolling up our sleeves and having less reports, methodology and academia and more actual knocking on doors and bringing people together.”

Integration priorities should be cross departmental and involve the whole community rather than just focusing on refugee and asylum seeker groups, says Mr Clifford.

“We have a very immature view of multiculturalism and integration in this country. We see it in that very anglophile, western way of assimilation. We love the picture of the young lads playing GAA and the little girl playing traditional fiddle. But integration is a bridge; you have two sides and each groups has to walk over and meet in the middle.”

Doras director John Lannon agrees greater efforts are needed to ensure Government integration commitments are not “superficial” and that programmes are “coordinated and structured”.

The toolkit, which was established with support from the UN Refugee Agency, is targeted at communities working with new arrivals under the Irish Refugee Resettlement Programme. It includes information on pre-arrival planning, cultural awareness, volunteer support, language supports, accommodation, health and wellbeing and supporting children, women, LGBT+ people, older people and people with disabilities.

“We’ve found there have been varying levels of effectiveness across local councils when it comes to integration,” said Mr Lannon.

“There has been inconsistency. We learned there are things which can be done to make the resettlement process run more smoothly and so people can understand the challenges that refugees coming here face. The level of guidance that’s needed to get it right hasn’t been there, that’s why we felt the toolkit was necessary.”