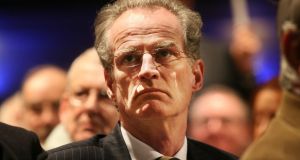 Dublin Airport owner DAA made an offer to purchase a site where a contentious plan for a third terminal is being advanced and told its owners that failure to take up the offer would hurt the value of any future deal offered by the airport.

The 50 hectares (123 acres) are owned by brothers and aviation entrepreneurs Ulick and Des McEvaddy who have attracted Dubai-based investment firm Tricap as backers of their plan for a third terminal.

In a 2017 letter outlining the offer, DAA said it wanted to buy the lands as they “could be of use for some secondary airport activities”. However, DAA made clear that if the offer was ignored, it would proceed with these activities elsewhere and “our interest in these lands will revert solely to agricultural values which are currently between €10,000 and €20,000 per acre”.

It is understood that the figure offered to the McEvaddys was in the region of €20 million, significantly below the valuation of the lands which underpinned the deal with Tricap. The deal ultimately saw the Dubai financiers buy out debts secured on the lands, which had been transferred into Nama. Tricap is now backing the third terminal plan in the form of a joint venture with Omega Air, Ulick McEvaddy’s aviation business that supplies mid-air refueling services to the US military.

According to the letter, which was copied to Nama’s head of asset recovery, discussions between the McEvaddys and DAA regarding a potential purchase of the lands had been ongoing for some time. “We have been in periodic discussions with you over a number of years regarding a possibly purchase of these lands,” wrote John Heffernan, the former chief development officer of DAA. It also reveals that a first offer was made almost a year prior to the second offer, in January 2016.

The McEvaddys have for years sought to push ahead with their plan for a terminal on their airport lands, which are located to the west of the existing airport campus, close to the runways. Ulick McEvaddy said in September that architects working for him were putting the finishing touches to a planning application for the third terminal, which he has claimed will be able to handle an extra 30 million passengers.

Mr McEvaddy and his brother have consistently criticised DAA’s plans to expand capacity at the airport without the construction of the new terminal. DAA has said it will spend €2 billion in the coming years to increase capacity at the airport. However, that plan may be endangered by a decision by the Commission for Aviation Regulation to lower DAA’s passenger charges by 22 per cent.

DAA chief executive Dalton Philips has said that the determination is a “disaster for passengers and for the Irish economy, as we won’t be able to pay for the new and improved facilities that are required at Dublin Airport.”

DAA has said it does not see the need for a new terminal at the airport. Minister for Transport Shane Ross had said he planned to make a decision on whether a third terminal was needed early in 2019, but no announcement has yet been made.

A spokesman for Omega Air had no comment when contacted. A spokesman for DAA said it does not comment on whether or not it has had specific commercial discussions with third parties.