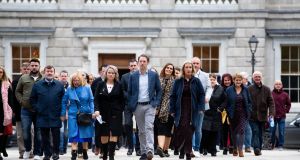 CervicalCheck campaigners leaving Leinster House on the day the Taoiseach made a formal State apology to those affected. File photograph: Tom Honan

A HSE-commissioned preliminary review of whether any health service staff should face disciplinary action over the cervical screening controversy has not yet concluded, more than a year after it was first established.

Following the publication of the official report on the controversy by Dr Gabriel Scally last year the HSE announced it had established a preliminary scoping exercise with the objective of determining whether there were people who had “a case to answer” under the health authority’s disciplinary code.

The HSE said in October 2018 that the review was being conducted by an external team with expertise in employment law.

“Without any challenges, it is expected that the scoping exercise should take four months to complete,” it said at the time.

More than 12 months later the HSE-commissioned process has not been finalised, according to highly-placed sources.

In a statement to The Irish Times, the HSE said: “The recently appointed chief executive officer of the HSE [Paul Reid] sought a briefing on the scoping-exercise. Following this briefing (and examining lessons learned from similar scoping exercises) the CEO has a number of concerns around the wider aspects of accountability and performance management.”

“He intends bringing a number of recommendations to the HSE board on this in the near future. It would be inappropriate to comment further until this happens.”

The HSE said last year that under its terms of reference, the independent panel carrying out the scoping exercise would review documentation provided by the health authority to the Scally inquiry.

In addition, it would have powers to seek other material from the HSE or from any other person if it considered that this would be of assistance in its work.

The reviewers could also request written clarification from the HSE on any matter pertaining to the process. They would also be able to obtain any clinical input, expertise and/or advice if they believe this would be of assistance.

The panel would, on completion of its inquiry, tell the HSE’s national director of human resources its findings. This officer would then “arrange for any disciplinary case to answer to be dealt with by the appropriate member of senior management in accordance with the provisions of the relevant disciplinary procedure”.

Mr Reid told the HSE board in September that it was important to have an updated and comprehensive accountability framework in place that applied across all levels of the HSE.

He said that as the State’s primary provider of health and personal social services, “it is only right that the HSE be regarded by the public as an accountable organisation”.

“At the same time, it is desirable that the people who work for the HSE are encouraged to be open with our patients and service users when things go wrong. We must also be fair to our staff when they admit to making mistakes.”

He proposed that work got under way on devising an integrated accountability framework.