Trinity College refuses to say what paintings, sculptures kept for academic eyes only 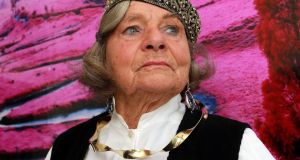 Artist Imogen Stuart’s Pangur Bán is the one valuable sculpture not currently on display in UCD, the university has said. File photograph: Nick Bradshaw

But while some of the country’s foremost seats of learning have disclosed the works out of reach for most citizens, others, including Trinity College Dublin, refuse to say what paintings and sculptures are kept for academic eyes only.

In response to a freedom of information request, NUI Galway listed more than 20 works – deemed to be of national significance or valued at more than €10,000 – which it said the ordinary member of the public could not easily view.

Also among the works are a portrait of Lady Augusta Gregory and paintings of Killary Harbour in Co Galway, the Mweelrea mountains in Co Mayo and the river at Annamoe in Co Wicklow.

A spokesman for NUI Galway said its ethos was to “share our art collection as widely as possible with the community – both the campus community and the public” but he acknowledged that “not all areas of the university are as easily accessed by the public”.

Works hang in the university library, which is open only to cardholders, and in some buildings “that would not experience much need for the public to pass through”, the spokesman said.

There are also works in offices “which members of the public may not encounter unless they are meeting with staff from that area”.

“Security and conservation are also factors in determining the availability of artworks for public display,” he added.

The spokesman said members of the public can contact the university to request to view works normally out of sight, adding that “this possibility” was noted on its online art collection database.

University College Dublin (UCD) said “that all artworks, apart from one sculpture” in its collection valued at €10,000 or more or that are deemed of national significance “are on display to the public”.

They are mostly part of the National Folklore Collection at UCD is open to the public free of charge “during standard UCD hours year round”.

The one valuable sculpture not on display is the Pangur Bán by Imogen Stuart. UCD said it was finalising a deal with the Office of Public Works to send the pitch pine installation to Áras an Uachtaráin.

University of Limerick said it had one highly-valued artwork out of public sight – an 8m outdoor sculpture called Vertical Growth.

University College Cork and NUI Maynooth both said they do not have any art valued at more than €10,000 or of national significance kept away from the public gaze.

But Trinity College Dublin said the “public interest is better served” by its refusing to disclose what it keeps away from the eyes of everyday citizens.

In response to a freedom of information request, assistant secretary Victoria Butler claimed exemptions under the laws on the grounds of security.

Given both the “national and international cultural significance” of the college’s art collections “the public interest is better served, as is the safety of the college community, the collections, and college buildings, by refusing this request”, she said.

“The university is committed to displaying artworks in as many appropriate locations as possible, noting that some pieces of the collection may not be on display at certain times due to conservation works or building refurbishment works,” she added.

According to Trinity’s website, its “historic and modern” art collections include about 2,000 artworks both in public and private locations in its buildings, including the Provost’s House, the Old Library, the Dining Hall, offices and teaching facilities.

Dublin City University said it had one highly-valued artwork not on public display but refused to disclose details of it “on security grounds”.

Universities in Ireland are allocated €1.7 billion a year from the public purse, according to a spokesman for Minister for Education Joe McHugh.