Irish exports could replace 55% of UK goods imported by Germany 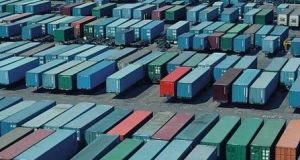 The report found that while Brexit poses challenges for both exports and imports, “there are significant opportunities for substitution of UK goods by those produced in either Ireland or Germany”. Photograph: Getty Images

Irish exports could replace up to 55 per cent of UK products imported by Germany after a hard Brexit, a study has found.

The research, which was conducted by DCU professor of economics Edgar Morgenroth for the German-Irish Chamber of Commerce, found that while a hard Brexit is “not desirable, it does increase opportunities for import substitution and inter-EU trade as the UK is likely to lose market share”.

In effect, this means that buying Irish goods may become more attractive due to the extra expense of tariffs imposed on UK imports if a hard Brexit occurs. Furthermore, the difficulty of moving British goods through customs might prove to be an extra drag on trade.

German imports of UK meat products would incur an average tariff of 36 per cent, while average tariffs of over 10 per cent would be levied on other foodstuffs and ingredients, such as cereals, dairy, flour, processed meats and fish, vegetables and eggs.

Even with the higher cost of transporting goods from Ireland to Germany relative to the current price of imports from the UK, Irish goods may end up being cheaper after a hard Brexit.

“In 2017 Germany imported 4,192 product lines from the UK. The analysis suggests that in 2,311 cases (55 per cent) an Irish alternative might be available and cheaper after Brexit.”

Similarly, there may be an increase in Irish imports of German goods for the same reasons, according to the paper. It found that Ireland imported 4,404 product lines in 2017 from the UK, and that 61 per cent of the time a German alternative may be available and cheaper after a hard Brexit.

The report found that while Brexit poses significant challenges for both exports and imports which will affect consumers and producers, “there are significant opportunities for substitution of UK goods by those produced in either Ireland or Germany”.

Dr Volker Treier, who is deputy chief executive with the Association of German Chambers of Commerce worldwide, said in Dublin last week that one of the results of Brexit was that Ireland and Germany were moving closer together.

“This decision has brought Germany and Ireland closer together because we are now much more interested in what is happening here,” he said, arguing that the understanding of Irish issues was much greater among the German population now than before Brexit.

“The usual German is getting more and more familiar with the problem. Most of the Germans have an idea of how this is so important, and in the majority support that there will not be a division between Ireland and Northern Ireland, because we have our own experience of division, and hard borders and walls.”

The German-Irish chamber has been lobbying for improved trade routes between the two countries after Brexit. Earlier this year former taoiseach Enda Kenny travelled to Berlin as part of an effort to convince German politicians of the merits of a post-Brexit sea route between Ireland and Germany. The trip was organised by the chamber.