Over 30 calls logged in relation to rodents, ants, wasps, bluebottles and silverfish 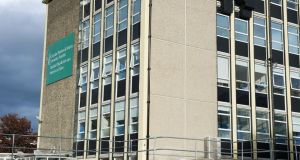 A source in the Coombe hospital said the sighting of rodents recently has meant some rooms were out of use, resulting in women being moved to different areas in the hospital. File photograph: Barry Cronin

The Coombe hospital made 52 calls to pest control since the start of last year to deal with rodents, silverfish, ants and other insects, new documents reveal.

Information released to The Irish Times under freedom of information legislation revealed that last year, 31 calls were logged on the hospital’s maintenance system in relation to rodents, ants, wasps, bluebottles and silverfish.

From January until August 31st this year, 21 calls were made in relation to rodents, ants, bluebottles and flies.

A source in the hospital said the sighting of rodents recently has meant that certain rooms were temporarily out of use resulting in women being moved for treatment to different areas in the hospital.

A spokesman for the hospital insisted that the Coombe Women and Infants University Hospital had “no current issue” with rodents and would not comment on rooms or theatres being closed.

“If we receive a report of an alleged sighting, our pest control contractors are contacted. They respond quickly to investigate and continue to follow up until they are satisfied that the issue has been resolved.”

Fianna Fáil’s health spokesman, Stephen Donnelly, has said “women, babies and healthcare professionals are suffering” because of a lack of investment in maternity hospitals.

He criticised the Government’s commitment to improving maternity services for women and said “not a single euro” has been allocated towards the proposal to relocate the Coombe to the site of the new national children’s hospital at the St James’s Hospital campus in order to achieve the trilocation of adult, paediatric and maternity services.

The site includes 1.2 hectares (3 acres) of space for a maternity hospital but to date no move has been made to start this project.

Minister for Health Simon Harris has said there was “no doubt” that “we are going to build the Coombe on the site of this hospital and we are going to have trilocation”. However, he said earlier this year there is no provision in this year’s health estimates for the project.

“I asked the Minister if any money has been allocated in 2019 to hire even an architect to start this plan for the Coombe. Nothing has happened. The women who receive care in the Coombe and the people who work there were promised a new hospital, and were told about how important it was to have trilocation. But not a single euro has been allocated for this,” said Mr Donnelly.

“Essentially the issue is that people working in the Coombe are working in outdated facilities. They are under incredible pressure and there is also a massive shortage of doctors and midwives. Women, their babies and healthcare professionals are suffering,” he said.

Former master of the Coombe Chris Fitzpatrick warned in April that the construction of the national children’s hospital on the current site should proceed only if a maternity hospital can be accommodated beside it.

He said that “there is widespread scepticism that maternity co-location will or even can happen”.

“For those of us who watched this process unfold over 13 years, there are significant credibility issues,” he said.