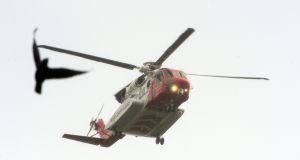 Four Lithuanian men have been rescued from an island off the coast of Co Sligo by an Irish Coast Guard helicopter after their fishing boat overturned.

The four were lifted from Inishmurray Island by the Rescue 118 helicopter, which is based in Sligo, after being spotted during a sweep of the area. The emergency services had been contacted by the men at 1.06pm.

A Coast Guard spokesman based at Malin in Co Donegal said there was initially confusion surrounding where the men were located. It was first believed that they were on Coney Island in Sligo Bay, but they were later located safe and well on Inishmurray Island.

Lifeboats were sent from Sligo and Bundoran and the men’s boat was found overturned on the rocks off the island.

The four were picked up by helicopter on the island at 1.35pm and flown to Sligo.