Ballinamore residents to set up welcoming committee for asylum seekers 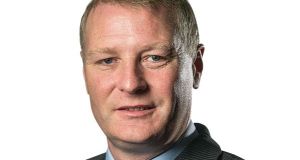 Martin Kenny: The Sinn Féin TD ’s car was set alight in an apparent arson attack outside his home a week ago.

A group of Ballinamore residents who are set to form a welcoming committee in the Co Leitrim town this week say they want an “alternative voice” to be heard on the issue of asylum seekers.

The group has already met with campaigners from Ballaghaderreen, Co Roscommon who welcomed over 200 Syrian refugees to their town in 2017, seeking advice on how to support the new arrivals. It is inviting locals to a public meeting in the town on Tuesday.

Minister of State for Equality, Immigration and Integration David Stanton is due to meet members of Ballinamore Community Group in Dublin, also on Tuesday, as a round-the-clock protest continues in the town.

Following a meeting last week, local campaigners said the Minister had agreed to “pause” the plan to accommodate asylum seekers at an apartment complex known as The Rock. Mr Stanton said he looked forward to further dialogue.

The issue will also be raised at a meeting of Leitrim County Council on Monday.

Ballinamore resident Caroline Dempsey, one of those organising the welcoming committee, said she had stepped forward after local TD Martin Kenny’s car was set alight in an apparent arson attack outside his home a week ago.

“I think that was a catalyst and I just wanted to show that there is an alternative voice in Ballinamore and it is becoming more mainstream,” said the Dubliner who has lived in Ballinamore for over two years.

Ms Dempsey, who has stood with a placard saying “Fáilte Isteach” opposite the protesters in Ballinamore, said the reaction she had got from people on the protest had been “very polite”.

“I know some of those people and I know they are really nice people who are there with very good intentions,” she added.

She said she believed many people were protesting “because they see it as a way of supporting their community but I think they can support their community in a more positive way”.

Local Fine Gael councillor Italy Reynolds Flynn who has a motion before Monday’s council meeting urging the Government not to proceed with the proposal, and to instead come up with a “more cohesive and measured” alternative, said Ballinamore would welcome asylum seekers.

She added said a broad spectrum of people in Ballinamore were protesting because of the lack of consultation, because of the numbers involved and because they did not want asylum seekers “segregated” on one site.

Anna O’Donogue who is also part of the welcoming group in Ballinamore , said that as the mother of a mixed race child she knew people in Ballinamore were not racist. She said that by not consulting, the Government had “got people’s backs up” and that was why there was a 24-hour protest ongoing.

But Ms O’Donoghue said the protest should end.

“They should have a bit of sympathy for people in need who may be coming from a war-torn country,” she said.

Sajjad Hussain one of a number of Ballaghaderreen residents presented with a People of the Year award in 2018 , in recognition of their contribution to welcoming refugees , said he hoped people could learn from the positive experience there.

The Pakistani-born barber said there had been valid concerns about lack of supports and the Government had not provided some of the services promised.

But he believed asylum seekers should be welcomed “with open arms “ to Ballinamore while the community continued to push for the necessary supports.

Deputy Martin Kenny said he hoped that the establishment of a welcoming committee in Ballinamore would lead to consensus in the community and an end to the protest .