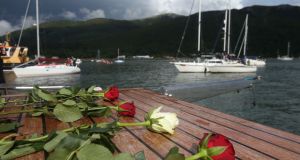 Roses aboard a boat taking part in the cross-border flotilla on Carlingford Lough. Photograph: Niall Carson/PA

Nearly 100 boats have taken part in a cross-Border flotilla on Carlingford Lough in memory of the crew of the Rescue 116 helicopter that crashed off the Co Mayo coast.

Four wreaths were laid by representatives of those killed, and red and white roses were also placed in the water. The vessels were played into Carlingford marina by a piper.

A flypast by another coast guard helicopter marked poignant scenes amid the heavy downpours.

Rescue 116 crashed off Co Mayo at 12.46am on March 14th with four crew on board after it struck Blackrock Island.

The bodies of winchmen Paul Ormsby and Ciaran Smith were never recovered despite weeks of intensive seabed, surface and shore searches.

Also on board were Capt Dara Fitzpatrick, the commander of the flight, who was pulled from the sea in the hours after the crash, and Capt Mark Duffy, the copilot whose body was taken from the cockpit 12 days later by Navy divers.

Mr Duffy’s uncle Terry Murray took part in the flotilla. He said: “We are very impressed that so many people came out and offered their support. It is very heartening.”

He said the gesture during the flypast of the helicopter, its nose dipping, was very touching.

“It just brings home to you what these flight crews go through,” he said. “It was great support and is much appreciated.”

All marine vessels on Carlingford Lough were invited to join the flotilla on Sunday, culminating in a ceremony at Rostrevor Bay in Co Down. Kilkeel RNLI lifeboats were among those present.

Organiser Sheila Fitzgerald, whose cousin, winchman Ciaran Smith, died in the crash, said: “It’s such an important cross-Border event and it’s important to remember, if you’re a mariner and you’re in trouble at sea, you don’t care who comes to rescue you.”