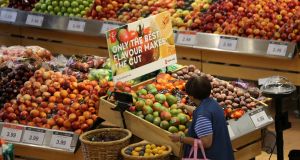 Bord Bia’s Periscope report shows 52 per cent of shoppers say price is the first thing they look at, compared with 64 per cent in 2013 and 60 per cent two years earlier. Photograph: Chris Helgren/Reuters

Irish consumers are less concerned about the price of groceries than at any point since the height of the boom, a Bord Bia study to be published this week has found.

Quality and wholesomeness rather than cost have become more important in the weekly shop, the research shows, with 52 per cent of shoppers saying price was the first thing they looked at when deciding what to buy compared with 64 per cent in 2013 and 60 per cent two years earlier.

The bi-annual Periscope report also suggests that consumers are less inclined to buy on impulse simply because they believe a product is cheap. The number shopping in this way has fallen from 53 per cent in 2007 when the economy started to crumble to just 23 per cent now.

There has been a significant fall in the numbers spreading their shop among retailers with only 12 per cent saying they routinely do that now compared to 23 per cent in 2015.

The survey of over 1,100 people carried out by Bord Bia’s Insight Centre also shows consumers becoming more environmentally conscious and increasingly concerned about the amount of food they end up throwing away.

An awareness of food waste has climbed to 88 per cent from 79 per cent in 2015, with 50 per cent expressing concerned over the amount of food they bin.

There appears to be uncertainty about what foods are healthy with close to half of those polled claiming to be confused about the health benefits of particular foods and 60 per cent saying nutritional claims and food labels are hard to understand.

Ready meal consumption has fallen significantly from 62 per cent in 2005 to 43 per cent in 2017, with many saying such meals are neither good value for money or made with quality ingredients.