‘Just what is going on in Dublin?’ asks DUP of Irish statements on Brexit 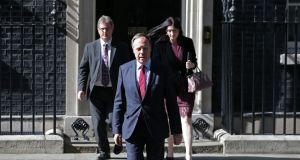 The DUP has accused the Irish Government of “going backwards” and “politicking” over Brexit in preparation for a general election.

On Sunday DUP deputy leader Nigel Dodds suggested since Enda Kenny was replaced as Taoiseach by Leo Varadkar and Simon Coveney took over from Charlie Flanagan as Minister for Foreign Affairs, “confusion seems to be the order of the day”.

“Just what is going in Dublin?” he asked.

The North Belfast MP said there had been a series of “inconsistent and incoherent statements” from both men and accused Mr Varadkar of having an “intemperate outburst” after the Taoiseach said the State would not “design a border for Brexiteers”.

This came after Mr Coveney denied a newspaper report suggesting the Government preferred the idea of a sea border after Brexit.

A spokesman for the Taoiseach said yesterday that Mr Varadkar had already outlined his views on a number of issues relating to Brexit, including the Border, and had “nothing to add”.

Mr Varadkar, who is due to make his first visit as Taoiseach to the North in the coming days, had said the Government did not want to see any economic border on the island after Brexit and that he hoped unionists would not respond angrily to his position.

“There already is an economic border between Northern Ireland and the Irish Republic,” he said. “For instance, does he not realise that every time you cross the Border you need to change currency? Or that each jurisdiction is subject to entirely different taxation and financial regimes?

“It is good that the UK government swiftly and forcefully debunked any notion of internal borders within the UK.

“That’s in line with previous commitments given to us by the prime minister, and it’s something that is non-negotiable. “Sensible work to achieve practical and mutually beneficial arrangements for the Border after Brexit have been stopped on Varadkar’s orders.”

Mr Dodds spoke of Mr Coveney “adopting the language of Sinn Féin” when the latter spoke about special status for the North in the European Union after Brexit.

Fianna Fáil spokesman on Brexit, Stephen Donnelly, said the arguments being put forward by Mr Dodds were “beyond preposterous”.

“My main response to the statement is that it is a masterclass in irony. It’s very hard to take talk of common sense co-operation seriously from a Brexiteer. The very act that has taken us backwards is Brexit.”

Mr Donnelly said Fianna Fáil recognised the diplomatic efforts of the Government and the suggestion of having the Border in the Irish Sea was one of the options put forward by his own party in the event of Brexit occurring.

Sinn Féin spokesman David Cullinane said the only people who had been inconsistent and incoherent when it came to Brexit were the British government.

“The DUP strategy is to give a blank cheque to the British government. Nigel Dodds would be better served dealing with the negative consequence of a hard Brexit rather than throwing his rattle out of he pram,” he said.

Earlier on Sunday, the DUP’s Lagan Valley MP, Jeffrey Donaldson, faced criticism from Twitter users after he was critical of the Dublin administration.

He wrote on Twitter: “A country that uses electronic toll tag systems on 11 of its main roads can’t claim there isn’t a technological solution to a Brexit border.”

Several Twitter users pointed out there is a huge difference between paying toll charges and immigration and customs checks.