Ghosts of past loom over West Cork History Festival 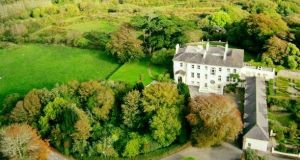 The temperature threatened to rise dramatically on more than a few occasions over the weekend at the inaugural West Cork History Festival at Lissard Estate in Skibbereen. Photograph: Liss Ard Estate/Twitter

The setting may well have been bucolic and the weather pleasant but the temperature threatened to rise dramatically on more than a few occasions over the weekend at the inaugural West Cork History Festival on the Lissard Estate outside Skibbereen.

In some respects, it was hardly surprising given that much of the focus was on the War of Independence in west Cork and still raging controversies over the killing of spies and informers as well as the Bandon Valley killings when 13 Protestants were shot dead in April 1922 after the truce.

The festival had already generated several early salvos in the letters pages of the Southern Star newspaper with festival participants historian Dr Eve Morrison and filmmaker Gerry Gregg both engaging in some robust exchanges with their critics, Dr Niall Meehan and Tom Cooper.

Dr Morrison’s paper at the festival was entitled Cork Ghosts of the Irish Revolution but it was clear that if there was one ghost looming large over proceedings it was that of the late Canadian historian Dr Peter Hart whose writings on the IRA in Cork have triggered nearly 20 years of heated debate.

Dr Hart’s thesis that the IRA in Cork engaged in a sectarian war against Protestants was strongly countered in a paper by Dr Andy Bielenberg whose detailed research on the Cork Fatality Project suggested that sectarianism was not a factor in killings during the War of Independence.

But while Dr Bielenberg’s work was greeted with a respectful acceptance, other speakers such as Kevin Myers and Prof David Fitzpatrick provoked some passionate responses from the floor including from Seán Ó Ceilleachair of the Kilmichael and Crossbarry Commemoration Committee.

Mr Ó Ceilleachair still carries the torch for his late father, Tom Kelleher, and his comrade-in-arms, West Cork Flying Column leader Tom Barry and at times he got involved in some robust exchanges.

However, perhaps the most heated exchanges came after a screening of Eoghan Harris’s film, An Tost Fada about how the family of a Church of Ireland clergyman had to flee west Cork in April 1922 after his father was threatened he would be killed by the IRA.

Local Sinn Féin member Donnacha O’Shea rejected suggestions that the IRA had engaged in any sectarianism in west Cork during the War of Independence but Harris responded “Why are you putting footnotes on everything? There’s a man there telling his life story, he cannot be gainsaid by anyone. He speaks for himself.”

Almost a century on, peace may well have come to scenic Lissard but as the West Cork History Festival showed the Troubles continue to cast a long shadow though perhaps it is only through heated debates that light can ultimately be shed on the past and people come to terms with it.