Cosmetics, toothpastes and cleaning agents use plastic particles which can harm the marine environment 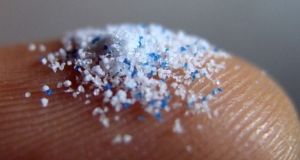 Microbeads from an exfoliating daily wash. Use of the plastic particles in products is outlawed in Canada, and is due to be prohibited in Britain and the US this year

Minister for Local Government Simon Coveney has moved to introduce a ban on cosmetics, toothpastes and other products containing plastic microbeads.

Microplastic pollution is “one of the most significant marine environmental challenges of the 21st century”, Mr Coveney says.

He is due to initiate a six-week public consultation on Monday on a proposed legislative ban on certain products ranging from body-care scrubs to detergents which contain microbeads.

Use of the plastic particles in products is already outlawed in Canada, and is due to be prohibited in Britain and the US this year. A number of EU states, including Ireland, have said they wish to introduce an EU-wide ban.

Mr Coveney has said plastic microbeads represent a fraction of microplastics in ocean. However, they can be ingested by marine life with fatal consequences.

Mr Coveney, a former minister for the marine and a keen sailor, said he was very concerned about the levels of plastic litter in seas and oceans, and was determined to address the issue.

“It is sobering to think that all plastic material which has ever ended up in the marine environment will reside there for many centuries to come unless it is somehow removed.”

He promised to write to the European Commission signalling the Government’s plan to introduce a ban on microbeads.

Last November Mr Coveney told the Seanad that the fact that marine litter was a trans-boundary issue meant that no one country could solve the problem unilaterally.

Mr Coveney said he was anxious to hear the views of relevant stakeholders, including public regulatory entities, manufacturers, retailers, consumers, environmental non-governmental organisations and other concerned members of society.

The closing date for submissions is March 24th.