One message falsely claimed country to be put into ‘complete lockdown’ 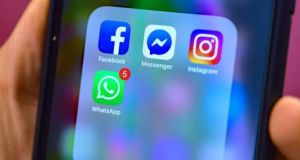 Zero eight-hundred-hours (8am) came and went, as did 11am, and despite speculation whipped up by bogus messages shared widely on social media over the weekend, the country was not put into a “complete lockdown.”

There was no sign of Defence Forces personnel patrolling the streets in rental cars to prevent looting or widespread social disorder.

Hushed video messages and voice notes warning of a “complete lockdown” or a status “red” emergency being declared, were among a maelstrom of false information about coronavirus circulating in social media group chats.

Health officials have consistently stressed the public should only trust information provided by sources such as the Health Service Executive (HSE), Department of Health, An Garda Síochána, and the Defence Forces.

The department has held almost daily press conferences to provide the media with information about the spread of coronavirus and what steps are being taken in response to the crisis.

Despite warnings, misinformation and fake news continues to circulate widely on social media messaging apps such as WhatsApp in particular.

One debunked video circulating widely on WhatsApp over the weekend recorded by an anonymous figure, purported to have information about the imminent announcement of a “14 day complete lockdown” across the country.

“Take what I’m gonna tell you as Gospel,” the video begins before going on to share information provided by the sender’s “best friend” who works for a car rental company, who he claimed attended a meeting with senior officials in An Garda Síochána, the HSE and the Defence Forces.

The individual goes on to claim officials informed the car rental company employee an address to the nation would be made at 8am informing the public of a total lockdown preventing people from leaving their homes.

“The army will be patrolling the cities to deter people from looting and criminal damage and so forth,” the video continues. The message was fake news.

Similar messages shared widely on WhatsApp over the weekend claimed Taoiseach Leo Varadkar was due to make an announcement at “zero eight hundred hours” that the country was to enter a status “red” emergency, or in another versions an 11am announcement of a lockdown.

On Sunday, Defence Forces chief of staff Vice Admiral Mark Mellett said its members were providing support to the HSE in planning, contact tracing, transport and testing. “Get your facts from credible sources. Do not amplify fake news,” Mr Mellett said.

Similarly, the Defence Forces released a statement on Twitter stating its official channels “are the only sources of truth regarding DF operations and activities. Misinformation at this time is unhelpful,” it said.

On Monday, Mr Varadkar also urged individuals to stop sharing unverified information on WhatsApp groups. “These messages are scaring and confusing people and causing real damage. Please get your info from official, trusted sources,” he said in a post on Twitter.

Unlike Twitter or Facebook where shared or retweeted messages can be quickly traced back to the original sender, WhatsApp messages can be forwarded into several group chats where people cannot trace the video or voice recording to the source.

In a statement, WhatsApp owners Facebook said it had previously taken steps to reduce the number of people or groups a sender can forward a message to at once to five.

“We encourage all users to check the facts online before sharing messages that have been forwarded to them, and we encourage users to engage directly with trusted and official sources for important information,” the statement said.

WhatsApp had introduced labels to indicate if a message has been “highly forwarded” to several groups, and has a monitoring system to identify and ban spam accounts, the statement said.

A spokeswoman for Twitter said the platform was “not seeing large scale coordinated platform manipulation surrounding the Covid-19 conversation.”

In early February, Twitter added a prompt to its site to direct people in Ireland searching for information on the coronavirus to the HSE website.

Another widely shared WhatsApp message on Sunday claimed four young people had been admitted to Cork University Hospital (CUH) in a serious condition with Covid-19, and had all been taking anti inflammatory medication.

The sender claimed his brother had been sent a statement from the head of infectious disease in CUH advising people to stop taking anti inflammatory medication, such as ibuprofen, for the duration of the coronavirus pandemic.

The Infectious Disease Society of Ireland, whose members include all CUH infectious disease consultants, advised people the message was fake, and should be ignored.

The information around anti-inflammatory medication did contain a kernel of truth. On Saturday, the French health minister Olivier Véran warned anti inflammatory drugs “could be an aggravating factor” for those with coronavirus. However, this advice did not extend to a blanket warning to avoid taking drugs such as ibuprofen, and health officials in Ireland have not issued advice in this regard.