‘Things got weird’: How Dancing with the Stars coped with coronavirus 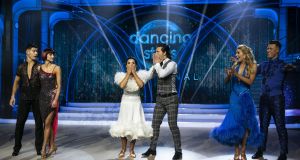 Until a few weeks ago this was set to be a season of Dancing with the Stars much like any other. It was obvious from early on that eventual winner Lottie Ryan was the performer to beat. And that Fr Ray Kelly and ex-Nationwide presenter Mary Kennedy were vying for the Marty Morrissey/ Des Cahill role of lovable amateur out of their depth yet determined to enjoy the rollercoaster.

Then, of course, coronavirus hit and things got weird. The semi-finals were dispensed with along with the studio audience. Instead, Sunday night was hastily reconfigured as the final and unfolded in an eerie silence.

Aidan Fogarty, the ex-Kilkenny hurler, describing dancing without a crowd as “ little bit surreal”. “Tonight’s not just the hardest show, this is the hardest show of the whole season,” agreed DWTS creative director Darren Bennett. “Coming out with no audience…”

Still, on went the performances and 2FM presenter Ryan was a deserved champion. She clearly adores dancing and has forged a powerful creative understanding with pro partner Pasquale La Rocca, who came to Ireland straight from winning DWTS Belgium.

As best girl in class, Ryan would have been easy to dislike. She arrived more or less the complete package and across the series the only negativity from the judges was that she was occasionally a tad too energetic ,and lacking in subtlety. Her technique, though, was beyond criticism and the panel of Loraine Barry, Brian Redmond and Julian Benson (who took ill later on and was replaced by creative director Bennett) remarked more than once that her standards were up there with those of the professional hoofers.

Yet there was no Little Miss Perfect routine from Ryan. She was grounded and likeable, and appeared to genuinely love every second on the dance floor. This was especially apparent in the final when she was reduced to speechlessness as she was declared winner.

That being said it’s hard to root for someone who is a fantastic dancer right from the start. The human interest quotient was instead served up Fr Ray and by mid-level hopefuls such as model Gráinne Gallanagh and hurler Fogarty.

Fr Ray, a wonderful singer who had a viral hit with a version of Leonard Cohen’s Hallelujah belted out from his alter in Oldcastle Co Meath, was keen but cursed with two (possibly three) left feet. Despite giving his all he finished consistently at the bottom of the leaderboard. Yet viewers – many steadfast parishioners perhaps among them – voted week after week to keep him in the running, until he was finally eliminated in the quarter-finals.

That made for good TV and Fr Ray came across as both in on the joke and also serious about improving as a dancer. Alas, he was soon on the receiving end of a nasty hate campaign, which took a turn for the chilling following the suicide of Caroline Flack. The fact he was both a slightly floundering reality TV star and a priest made him a “legitimate target” online in the eyes of some trolls.

They spewed vitriol at him online and also via a campaign of poison letters. It got to the point where he felt he needed to speak out and to, in the process, remind us Dancing with the Stars is just a bit of Sunday night fun.

There were other compelling stories, too. Fogarty did not follow in the tradition of sports stars twirling their way to victory (Kerry’s Aidan O’Mahony was the winner of the very first season). But he got better week by week and, more than that, overcame his ingrained adversity to revealing his vulnerable side during the slower, more demonstrative numbers. As an Irish male aged between five and 95, that won’t have come easy, and he is to be applauded for putting himself out there.

Ditto Gráinne Gallanagh, a successful model who nonetheless shares the national affliction of low self-confidence. She described being struck down with nerves before her performances while the judges picked up on a lack of self-belief in her earlier routines. Yet she kept at it and reached the final (albeit without having to make it through the semis). It’s lesson to us all that a little self belief can go a long way.

Also improving throughout were presenters Nicky Byrne and Jennifer Zamparelli. In her second year as host, Zamparelli was less anxious about being liked. Byrne has calmed down, too, and become more agreeable. Both were reassuringly resolute during the hastily-arranged final, in particular, and found a way to be enthusiastic without appearing oblivious to the surreal circumstances and the threat posed by coronavirus.

“Remember wash your hands, stay safe,” the Westlife singer said at the very end. You can only wish him and the crew likewise and hope that, 12 months from now, all we have to fret about are dancing priests and the angle of Nicky Byrne’s quiff.