Coronavirus: Airlines set to cancel up to 80% of flights 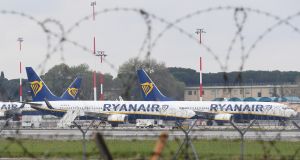 Ryanair airplanes are seen parked on the tarmac of the Rome-Ciampino International Airport. Photograph:Alberto Lingria/Reuters

Ryanair has said it expects to ground the majority of its aircraft fleet across Europe over the next seven to 10 days with a reduction of 80 per cent or more in flights in April and May.

The parent comanpay of Aer Lingus, IAG has also said it expects to have to cut its schedule by at least three quarters in the months ahead as the spread of the coronavirus brings air travel across much of the world to a virtual standstill.

In a statement Ryanair said that even in countries where its fleet is not grounded, social distancing restrictions may make flying to “all intents and purposes, impractical, if not, impossible”. It

It said that in recent days, the spread of the Covid-19 virus and associated travel restrictions, “many of which have been imposed without notice, have had a significant and negative impact on the schedules of all Ryanair Group Airlines”.

It pointed out that over the past seven days, Italy, Malta, Hungary, Czech Republic, Slovakia, Austria, Greece, Morocco, Spain, Portugal, Denmark, Poland, Norway and Cyprus had all imposed flight bans of varying degrees, from all flights to/from the country, or banned flights to/from countries with high risk of Covid infection.

“Over the weekend for example, Poland and Norway have banned all international flights, while in other countries (without travel bans) there has been severe reduction of ATC and essential airport services,” the statement says.

The airline said that for April and May it expects to reduce its seat capacity by up to 80 per cent and a full grounding of the fleet cannot be ruled out.

Ryanair said its focus today “is on completing as much of the scheduled flying program as is permitted by national governments over the next seven days, so that we can repatriate customers, where possible, even as flight bans are imposed and ATC and essential airport services are reduced.

“We are doing everything we can to meet the challenge posed by the Covid-19 outbreak, which has over the last week caused extraordinary and unprecedented travel restrictions to be imposed by National Governments, in many cases with minimal or zero notice,” chief executive Michael O’Leary said.

“We are communicating with all affected passengers by email and SMS, and we are organising rescue flights to repatriate customers, even in those countries where travel bans have been imposed. Our priority remains the health and welfare of our people and our passengers, and we are doing everything we can to ensure that they can be reunited with their friends and families during these difficult times.”

Ryanair is taking all actions necessary to cut operating expenses, and improve cash flows at each of our airlines. Ryanair is a resilient airline group, with a very strong balance sheet, and substantial cash liquidity, and we can, and will, with appropriate and timely action, survive through a prolonged period of reduced or even zero flight schedules, so that we are adequately prepared for the return to normality, which will come about sooner rather than later as EU Governments take unprecedented action to restrict the spread of Covid-19”.

Willie Walsh, head of IAG, will postpone his retirement to steer the group through the health emergency. Announcing a 75 per cent reduction in capacity over the next two months, Mr Walsh said there was no guarantee that many European airlines would survive.

His comments came as the Centre for Aviation, a respected aviation consultancy, warned that by the end of May most airlines would be bankrupt due to the unprecedented travel restrictions that are being rolled out by governments around the world.

“Many airlines have probably already been driven into technical bankruptcy, or are at least substantially in breach of debt covenants,” Capa said in a report. “By the end of May 2020, most airlines in the world will be bankrupt. Co-ordinated government and industry action is needed — now — if catastrophe is to be avoided.”