Teenager remains in critical condition after gun attack in Dublin 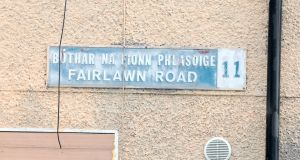 A male in his late teens is in a critical condition in hospital after being shot at Fairlawn Road in Dublin. Photograph: Collins

A man remains critically ill in hospital after being shot in what gardaí believe was a well planned attack in Dublin.

The victim, who in his late teens, was wounded several times in the upper body when a gunman opened fire on him as he sat in a car.

The incident occurred at Fairlawn Road, Finglas, at about 10.30pm on Saturday. Gardaí were first to arrive at the scene and discovered the wounded man.

He was treated at the scene by paramedics before being taken by ambulance to Connolly Hospital, Blanchardstown.

The wounded man was since been transferred to St Vincent’s University Hospital in Dublin.

His condition was described on Sunday as stable but critical. Garda sources said he was fortunate to survive the attack.

“No persons have been arrested at this time and investigations ongoing,” the Garda said in a statement.

The scene where he was shot, in what gardai believe was an attempted murder, was sealed off and has undergone examination by members of the Garda Technical Bureau.

The man has been linked to criminals involved in feuding in Finglas and Coolock and gardaí were still trying to determine a specific motive for the attack on him.

A close associate of the wounded man was murdered in feuding in Dublin over a decade ago, though the attack on Saturday is not believe to be linked to that crime.

Instead, gardaí were examining if Saturday’s shooting was linked to an ongoing feud based mainly in Coolock but also involving criminals from Dublin.

It is also possible the shooting was carried out on behalf of a Dublin criminal now heavily involved in the Drogheda feud.

That Dublin criminal is suspected of ordering the killing and dismembering of Keane Mulready Woods in Drogheda in January.

His remains were found in two locations in north Dublin in the days that followed, though his torso has still not been found.

Gardaí are investigating reports the man shot and wounded in Finglas on Saturday night had an altercation on the street earlier this year with the senior criminal figure with ordered the murder of Mulready Woods.

They were trying to establish if Saturday’s shooting was effectively revenge for that altercation, which is believed to have taken place in Dublin.

However, the injured man was also close to a number of young drug dealers from north Dublin who were killed last year.

In the 10 months to last November, five men were murdered as part of the feud and Saturday’s attempted murder may be linked to that violent dispute.

That gun feud began with the murder of Zach Parker (23) in Swords, Co Dublin, last January. It involves mostly young drug dealers who formerly worked together in the drugs trade.

The Garda force was over the weekend preparing for a new policing plan related to the Covid-19 outbreak and which was set to begin on Monday morning.

However, gardai do not believe the attack was in any way time to take advantage of any perceived reduction in patrolling.

Informed sources said it was highly likely the public would notice more policing on the streets because of the special operation.

They also stressed that serious crime would continue to be dealt with robustly and that gangs involved in gun crime would remain under investigation.