Taoiseach Leo Varadkar has warned of an “exponential increase” in confirmed cases of the coronavirus in the coming days. 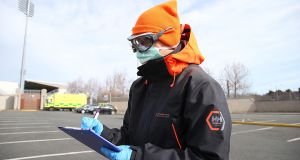 A healthcare worker at Shamrock Rovers’ Tallaght Stadium in Dublin which is being used as a testing centre for Covid-19 (Coronavirus). Photograph: Collins

Taoiseach Leo Varadkar has warned of an “exponential increase” in cases of coronavirus as the confirmed number in the Republic reached 223, and in the North 52, making a total of 275 on the island of Ireland.

The Department of Health confirmed 54 new cases of Covid-19 in the State on Monday night, bringing the total to 223.

It came as Mr Varadkar said he expects a significant increase in positive tests in the coming days and weeks, with some 15,000 expected before the end of the month. He said the number of confirmed cases could rise by 30 per cent a day.

Chief medical officer Dr Tony Holohan and his colleagues shared for the first time projections of case numbers likely to be disclosed in the coming days, as suggested by a statistical model developed by the Department of Health.

The model suggests 78 cases will emerge on St Patrick’s Day, 109 cases on Wednesday, with 355 cases per day by Sunday. That level of infection will require the contact tracing of 40,000 individuals, Dr Holohan said.

There is an expectation that it will be some days before the system is able to properly respond to a surge in demand for testing, Dr Colm Henry, the chief clinical officer said.

Nineteen new testing centres have been identified and that will rise to 34 by the end of the week. In the meantime, he said people should self isolate if needed; “the test will happen,” he said.

Dr Holohan said the current measures are likely to be extended significantly beyond the current timeframe of March 29th.

He said negotiations are ongoing between doctors’ representative groups and the department on this issue, and praised the work done by GPs as “heroic”.

Mr Varadkar earlier said the rise in numbers of cases “cannot be stopped” and the Government had moved to secure extra ventilators to preserve life.

Legislation to tackle the pandemic will be published on Tuesday.

It was also confirmed on Monday evening that Trinity College Dublin now has eight cases of coronavirus, up from five. The university is asking all students to leave campus accommodation, including international students, because large highly concentrated numbers of students living there will increase chances of rapid transmission.

The Government has resisted calls to instruct restaurants to close down following a Cabinet committee meeting on the coronavirus, it is understood.

It also emerged on Monday that the HSE is looking at using Croke Park as a temporary “drive-thru” coronavirus testing centre in the coming days, The Irish Times understands.

The HSE has been in contact with the Gaelic Athletic Association (GAA) after the latter offered the use of the 80,000-capacity stadium as a testing centre, as it is not currently being used for sporting events.

Local residents in the area surrounding the stadium have received correspondence from Croke Park on Monday about the plan. It is expected the HSE will announce details of it shortly, sources said.

“Following a high-level request from the HSE today and in the national interest, Croke Park is to become a ‘drive-thru’ facility for testing for Covid-19 for designated appointments. This will not be a walk-up service,” the email to locals, seen by The Irish Times, said.

“The stadium layout has been identified as being suitable for facilitating this important service at this time. As soon as we have further information, we will share it with you,” it said.

HSE staff in some Dublin primary care centres have been informed to provide details on how many staff would be required to maintain essential services, to free up other healthcare workers to be temporarily redeployed elsewhere as the health service prepares to significantly ramp up testing for coronavirus, officially known as Covid-19, in the coming days.

Meanwhile, the new online system in Ireland for booking Covid-19 tests has become “overburdened”, leading to outages and forcing the deployment of an alternative email system.

Some general practitioners have also reported long delays in trying to contact the HSE by phone to secure tests.

Up until this week, testing was carried out at people’s homes through the National Ambulance Service. However, while at-home tests continue, the HSE is also establishing a number of community testing sites across the country.

These sites will be attendance by referral only, meaning individuals cannot simply show up and receive a test.

The Netherlands will aim to develop immunity to Covid-19 among its population by allowing a large part of its people to contract the virus at a controlled pace, Dutch prime minister Mark Rutte announced in a national address on Monday.

“The reality is that in the near future a large part of the Dutch population will be infected with the virus,” Mr Rutte said. “We can slow down the spread of the virus while building controlled group immunity.”

The idea of developing group immunity to the coronavirus is controversial and the world Health Organization has questioned its basis in evidence.

Germany announced unprecedented plans on Monday to close most shops, limit restaurants’ opening hours and ban religious services to try to slow the spread of the coronavirus. The decision took Germany a step closer to a total lockdown similar to those implemented in Italy and Spain.

British prime minister Boris Johnson gave a televised press conference on Monday afternoon emphasising a move away from large groups of people being permitted to gather in the UK.

“We are emphatically moving away from mass gatherings,” he said. Such moves “are overwhelmingly worth it to slow the spread of the disease, to save life, minimise suffering, and give our NHS the chance to cope”.

British people needed to stop non-essential contact and avoid pubs, theatres and all unnecessary travel, he added. “We need people to start working from home where they possibly can.”

The HSE has advised any persons diagnosed with Covid-19 to continue taking medication they had been taking previously, unless told not to do so by their doctor, including anti-inflammatories such as ibuprofen or diclofenac.

Responding to what was termed false information about such medication and Covid-19 circulating on social media in the last 24 hours, Dr Colm Henry, chief clinical officer of the HSE advised: “Only take one anti-inflammatory medication at a time. It is okay to take paracetamol and an anti-inflammatory like ibuprofen at the same time.

“There is no evidence to stop any medication at this time.” He advised that if a person has respiratory symptoms, they should not attend a pharmacy in person.