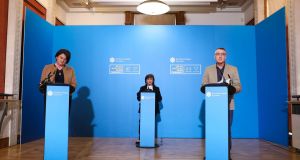 Stormont business will continue as usual notwithstanding that four of the Northern Executive’s 10 full Ministers are self-isolating, First Minister Arlene Foster said on Thursday.

It also appeared on Thursday evening that the row over DUP Minister for Agriculture Edwin Poots’s claim that the incidence of Covid-19 was far higher in nationalist than unionist areas would not be an impediment to Executive work.

The Executive held a three-hour Zoom meeting on Thursday afternoon attended by all 10 Ministers and two juniors on a day when the North’s health department reported 1,042 new cases of Covid-19, taking the total since the start of the pandemic to 31,034.

There were five more deaths, bringing the total to 634.

At an evening press conference attended by Ms Foster, junior minister Declan Kearney – the only Sinn Féin Minister not self-isolating – and DUP Minister for the Economy Diane Dodds it seemed that Ministers agreed to differ over Mr Poots’s comments.

Mr Foster said that Mr Poots issued his clarification on Wednesday where he said he had no intention of offending his Catholic friends and neighbours.

“I think it was important that he did that because from his point of view he would never have intended to offend anyone in the community, and as we know the virus is unfortunately present right across all of our communities in Northern Ireland, ” she added.

“I think people have made their minds up around what has been said,” he added.

“I don’t think anyone should be sectarianising Covid-19 or this pandemic. I think that is what has happened. There is no place for sectarianism either within our Executive or within our wider society.”

Nonetheless, Mr Kearney said Ministers did have a “focused, strategic discussion” at its meeting. He went on to say that the Executive was committed to act “decisively and cohesively” in relation to Covid-19.

He said the “clear resolve of the Executive” was to “move forward, to give assurance, to give hope, to set out a clear plan for our people and to let them know that we will do everything that we can on a united basis, as five parties in a powersharing coalition, to get in control of the spread of the virus”.

With the three other Sinn Féin Ministers – Michelle O’Neill, Conor Murphy and Carál Ní Chuilín – self-isolating because of contact with people who had tested positive for the virus Mr Kearney jokingly described himself as Sinn Féin’s “designated survivor”.

The other Minister self-isolating is Ulster Unionist Party Minister for Health Robin Swann.

On Wednesday evening, the UUP Assembly member John Stewart reported he had tested positive for the virus. At least four other MLAs are self-isolating over contacts with people with Covid-19.

In the past week 6,753 positive cases of coronavirus were confirmed by the North’s Department of Health.

Belfast is the next worst affected, experiencing 512 cases per 100,000 over the past seven days.

Currently, there are 291 Covid-19 patients in Northern Ireland hospitals with 33 in intensive care units and 23 on ventilators.

Gardaí recover €1.8m from money mule bank accounts in major investigation 16:15
Government accused of treating student nurses like ‘slave labour’ 15:59
National Missing Persons Day: ‘You don’t ever give up hope’ 15:53
Three to remain in jail until they agree to stay away from Roscommon farm – court 15:38
HSE doubts private hospitals will agree new deal for Covid-19 surges 15:21