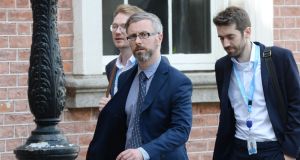 Minister for Children Roderic O’Gorman said he had asked Tusla to conduct a national review to determine whether other instances of alleged abuse in the organisation had been reported to the agency. Photograph: Alan Betson / The Irish Times.

The Government is to give “consideration” to setting up a scoping inquiry to examine historical child sexual abuse in St John Ambulance, with a review of records held by a number of State bodies to take place.

In August, The Irish Times published an article detailing the experiences of three survivors who were sexually abused by a former senior figure in the voluntary paramedic organisation in the 1990s.

Minister for Children Roderic O’Gorman on Thursday said he had asked Tusla, the child and family agency, to conduct a national review to determine whether other instances of alleged abuse in the organisation had been reported to the agency.

Mr O’Gorman was speaking in the Seanad in response to a call from Independent Senator Lynn Ruane to set up a scoping inquiry into historical child abuse in St John Ambulance.

Following the review of records held by Tusla and the departments, the Government would give “due consideration” to setting up a scoping inquiry into the matter, Mr O’Gorman said.

The Minister praised the “bravery and fortitude” of the three men who had spoken publicly about their abuse at the hands of the former senior figure.

Child sexual abuse allegations made against the men have been deemed to be founded, following a previous investigation by Tusla.

The perpetrator, who cannot be named for legal reasons, was a member of the voluntary organisation from the 1950s until at least 2000, and left under pressure to resign.

The abuser, who is still alive, operated in the Old Kilmainham division in Dublin. One of the survivors, Mick Finnegan, reported the abuse to the organisation in the late 1990s. The three survivors are now taking civil cases against both the abuser and St John Ambulance.

Gardaí investigated the matter based on the three complainants, but the Director of Public Prosecutions decided against pursuing a criminal case.

St John Ambulance has defended its current child protection standards, while stating it cannot comment on the past abuse due to the ongoing legal case.

Speaking in the Seanad, Ms Ruane said it appeared the abuse had been an “open secret” in the organisation, where “everybody knew, but nobody knew.”

“It would seem that abuse within St John Ambulance was tolerated at some level, at the highest levels of that organisation … So even though a particular individual is not there anymore, we do need to look at the structures that supported and facilitated that individual for such a long period of time,” she said.

Ms Ruane said she was “very concerned” that if abuse had occurred over decades there were likely other survivors. The number of people who had come forward to date was potentially just “scratching the surface,” she told the Seanad.

“Even with the current risk being mitigated with a particular individual being gone, we need to look at why it was allowed persist for so many generations, and how many other people have been impacted,” she said.

Ms Ruane called for a “transparent” inquiry to be undertaken, similar to the report conducted by Dr Gabriel Scally into the CervicalCheck controversy.

Mr O’Gorman said Tusla had previously reviewed the organisation’s current child safeguarding policy, and found it to be compliant with standards.